"My Girlfriend Is An Agent - Drama" Hwang Chan-sung 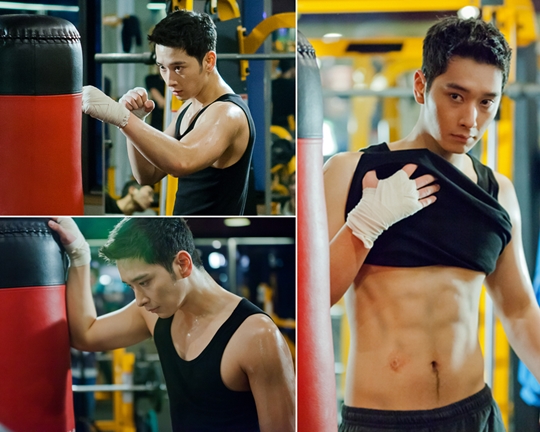 A still cut was revealed of Hwang from a scene from the upcoming MBC drama "7th Grade Civil Servant".

In the role of smart and cold acting Gong Do-ha, Hwang Chan-sung also has a crush on Seo-won (Choi Kang-hee) in secret and is tamed by wild wars.

This scene was taken in a gym in Seoul. His boxing skills outstand those of a boxer's and his well built body heated up the shooting atmosphere there.

The bullet mark under Hwang Chan-sung's abs shows the rougher side of him and emphasizes his manliness. Hwang Chan-sung will reveal his dark past and show undying love for Seo-won.

A source from the drama says, "He must be tired from working out that long but he stays focused. The way he acts is so sincere and serious. Maturity is something else that can be seen along with his charismatic charms".

MBC drama "7th Grade Civil Servant" will be aired after the current drama "Missing You" in January 2013.

""My Girlfriend Is An Agent - Drama" Hwang Chan-sung"
by HanCinema is licensed under a Creative Commons Attribution-Share Alike 3.0 Unported License.
Based on a work from this source