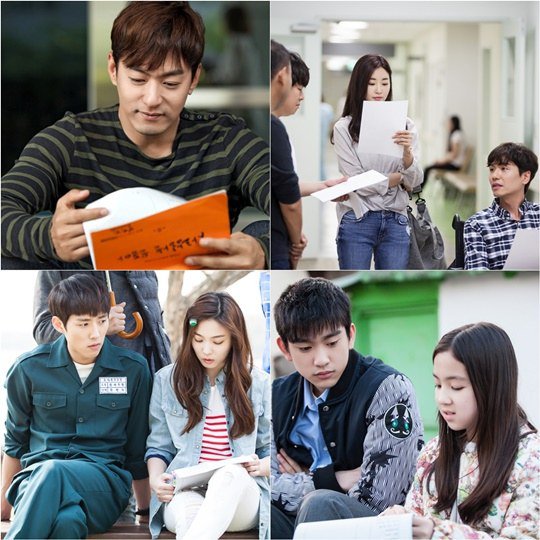 The cast of "My Love Eun-dong" were seen deeply immersed into their scripts.

Joo Jin-mo, Kim Sa-rang, Kim Tae-hoon, Baek Sung-hyun, Yoon So-hee, Jr., Lee Ja-in and others were studying the script and their characters. They already made a good impression in the 5-part web-drama "My Love Eun-dong – The Beginning" and has increased expectations.

Not only do the cast read their script whenever they can, they communicate with each other for the best teamwork.

Joo Jin-mo who plays the role of a man who only has eyes for one woman over a span of 20 years, has the biggest love for his script and never puts it down. He makes sure not to miss anything nor smile.

Kim Sa-rang can also be seen deeply concentrated in her script. Her cute and lovely character makes her eyes shine and the results of her hard work are like never seen before. Kim Tae-hoon also plays a completely different role from the bad guy that he was in "Angry Mom".

Baek Sung-hyun and Yoon So-hee, who play as Hyeon-soo and Eun-dong in their 20s, have to take care of the little details because their scenes are mostly done outside. They sit together during breaks to discuss the next scene.

Jr. who plays a teenage Hyeon-soo is a rising star as he shows progress unlike any other rookie. He memorized all of his script and still looks back into it to make sure he's got everything right. He also takes cares of Lee Ja-in and they practice their lines together, too.

"My Love Eun-dong" is the love story of a man who only loves one woman for 20 years and still looks for her even after becoming a top star. "My Love Eun-dong – The Beginning" was released on Naver TV Cast as a web-drama version previously and made a big hit. The first episode can be seen on May 29th at 8:40PM.

""My Love Eun-dong" Joo Jin-mo and Kim Sa-rang hard at work"
by HanCinema is licensed under a Creative Commons Attribution-Share Alike 3.0 Unported License.
Based on a work from this source