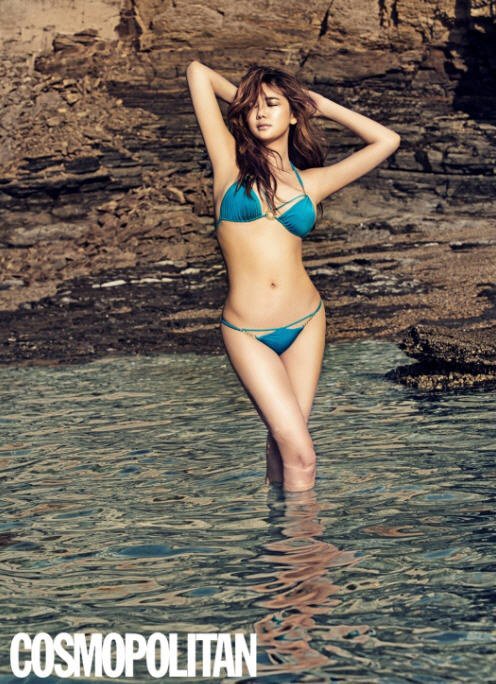 While actress Lee Tae-im is in the hot spot for apparently cussing at Kim Yewon during the recording of MBC TV show "My Tutor Friend", her sexy pictures have risen along with the incident.

Lee Tae-im's pictures were published in the 2014 June issue of the fashion magazine Cosmopolitan. She's wearing a bikini and posing with the ocean in the background.

Meanwhile, regarding her 'cussing incident', her management says, "We are careful to say anything. It is right that Kim Yewon heard some foul language but it wasn't a fight. Kim Yewon is younger and it wasn't her situation to talk back. Lee Jae-hoon from Cool was there and he felt bad about everything".

Kim Yewon had asked Lee Tae-im, who had jumped into the winter ocean when Lee Tae-im had swore at her. Everyone heard it and the recording of the show stopped for a while.

"My Tutor Friend Lee Tae-im cusses"
by HanCinema is licensed under a Creative Commons Attribution-Share Alike 3.0 Unported License.
Based on a work from this source