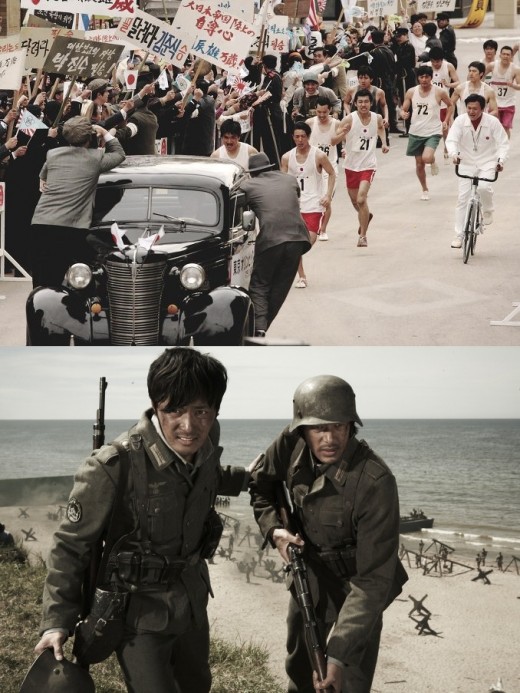 Jang Dong-gun and Joe Odagiri's "My Way" ranked number one out of all new films.

According to the Korean Films Commission on the 22nd, "My Way" raked in 107,562 audiences on the first day of its release on the 21st and came in second after "Mission Impossible: Ghost Protocol" by Tom Cruise and Paula Patton which gathered 164,534 audiences.

This movie which is about marathon competitors Kim Joon-sik (Jang Dong-gun) and Hasegawa Tatsuo (Joe Odagiri) who meet again in the Second World War and become each other's hope, cost a total of 28 billion won and is becoming an issue for it real war-like scenes.

On the same day, Robert Downey Junior and Jude Law's "Sherlock Holmes: Shadow Games" came in third with 69,141 audiences and Cho Seung-woo and Yang Dong-geun's "Perfect Game" came in fifth with a low number of 31,910.

Son Ye-jin and Lee Min-ki's "Spellbound" ranked fourth place with 35,175 audiences and "Alvin and the Super Band" ranked sixth. "Tintin: The Secret of the Unicorn", "Friends: Secret of the Monster Island 3D", "Breaking Dawn Part 1" and "Arthur Christmas" followed next.

""My Way" breaks through 100,000 on the first day"
by HanCinema is licensed under a Creative Commons Attribution-Share Alike 3.0 Unported License.
Based on a work from this source