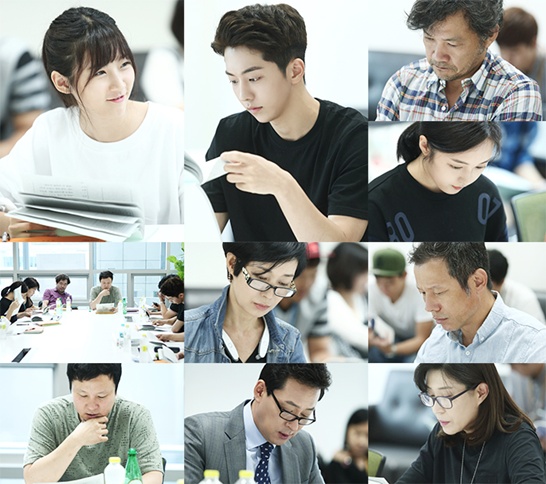 "Glamorous Temptation" is about a woman who tossed herself into the fancy world, seduced by the mysteriousness inadvertently. The drama depicts the influences she causes in the inaccessible top 1% of upper class society. Families destroyed by materialism will heal through the recreated family love. The drama is highly anticipated as a well-made drama.

On this day, writer Son Yeong-mok said, "Let's be happy and have fun working together", and producer Kim Sang-hyeob said, "Writer Son Yeong-mok is warmhearted and considerate so I can rely on him all the time. I'll do my best to create a fun drama".

The actors worked hard and professionally in the friendly atmosphere. The perfect interaction and chemistry between the actors raised the anticipation on the drama.

Nam Joo-hyuk, who plays the male lead, Jin Hyeong-woo's youth age expressed the fluttering heart of a boy, who fell in love for the first time. Kim Sae-ron, who plays the female lead, Sin Eun-soo's high school days, showed off her cute and lovely appeals, and of course her stable acting performances fully.

Nam Joo-hyuk and Kim Sae-ron heated up the room with the youthful and sweet loveline of high school students.

"Glamorous Temptation" will begin on October 5th after the completion of "Splendid Politics".

"Nam Joo-hyuk and Kim Sae-ron at script reading session of 'Glamorous Temptation'"
by HanCinema is licensed under a Creative Commons Attribution-Share Alike 3.0 Unported License.
Based on a work from this source