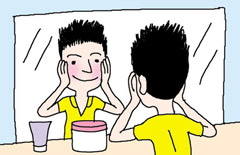 Sales of men's grooming products are growing sharply in Korea. According to market researcher Euromonitor International, male cosmetics and other goods in this sector scored sales of 284.6 million euros last year, accounting for one-sixth of global sales.

Korea ranked No. 1 in the purchase of male cosmetics worldwide, followed by China, Japan and the United States. U.S. consumers spent roughly half as much on their appearance as their Korean counterparts.

With the surging growth in demand for male beauty products in Korea, global cosmetics brands are rushing to make inroads into the market.

SK-II, a Procter & Gamble beauty brand that launched in Japan three decades ago, announced on Monday it will debut a new product called SK-II MEN in Korea, before taking the product to the U.S. and Europe.

"Old Boy" co-star Yoo Ji-tae has been named as the face of the brand for Asian countries including China and Japan, as well as in Europe and the U.S.

L'Oreal Paris Men Expert has also picked Korea as the first Asian country to focus its sales at, and Vichy and Lancome Homme have followed suit. Meanwhile, Korea remains the biggest market for Estee Lauder's Aramis for men since the end of 2009, pushing aside the U.K., the U.S. and Japan.

An insider with skin care product brand LJH Cosmetics said, "As middle-aged men, as well as men in their 20s and 30s, have developed a greater interest in enhancing their looks, sales of products directed at this market have jumped 40-50 percent from a year ago".

"Narcissistic Men Drawing Male Beauty Brands to Korea"
by HanCinema is licensed under a Creative Commons Attribution-Share Alike 3.0 Unported License.
Based on a work from this source