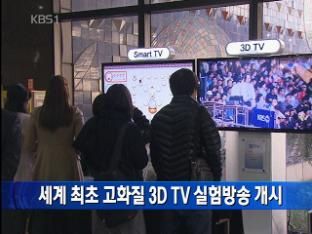 The nation has launched an HD 3D TV broadcasting on a trial basis for a year for the first time in the world.

HD 3D TVs will be set up at 100 locations, including a viewers' plaza at KBS headquarters in Seoul.

The KCC said that during the G-20 Seoul summit, HD 3D TV booths will be set up at the event's main venue, the COEX, and the plaza in front of Seoul City Hall.