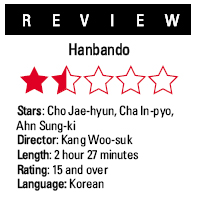 The new movie "Hanbando" (the Korean Peninsula) begins with the hypothetical premise that Japan will emerge in the near future as the main opponent of the unification of North and South Korea.

It also criticizes Japan's historical distortions of its rule of the Korean Peninsula from 1910 to 1945.

Although the sensitive theme appeals to Korean audiences, who know the tragic history of Japan's rule, in the end it becomes a propaganda film full of radical nationalism. It lacks cinematic development, reality, and a balanced approach to historical events and the current situation.

Directed by Kang Woo-seok, the film is set in the future as South Korea develops a close relationship with the North. The two Koreas agree to reopen a railway between the two states but, as it constructed the railway during its colonial occupation of the peninsula, Japan claims ownership of the railway.

To prove Japan has no right to the ownership, patriotic historian Choi Min-jae (played by Cho Jae-hyun), with cooperation from other progressive politicians and the President of South Korea (played by Ahn Sung-ki), seeks the authentic Great Seal of King Kojong, which the king hid. King Kojong was the 26th king of the Choson Kingdom and the first emperor of the Taehan Empire. They believe the original seal is a key to demonstrate that most contracts between Korea and Japan were either made forcibly or were faked.

The film is full of hyped emotions of all the main characters, and the development of story largely depends on too many dry instructive dialogues on historical, diplomatic and political issues.

But things get worse when Kang overdoses on nationalism as he explains tragic historical events.

In the movie, he recreates the tragic moments when Queen Myongsong and King Kojong were brutally killed by Japanese. This scene is simply over-dramatized.

Generally, in such films, nationalism is explored by presenting the North as a struggling sibling or by depicting other powers such as Japan, China and United States as imperialist enemies that threaten the nation's independence.

But Kang should ask himself who would be willing to spend money and time to listen to a boring ideological lecture for two and a half hours delivered by a teacher infused with sentimental patriotism.

"Nationalistic 'Hanbando' Lacks Healthy Perspective"
by HanCinema is licensed under a Creative Commons Attribution-Share Alike 3.0 Unported License.
Based on a work from this source