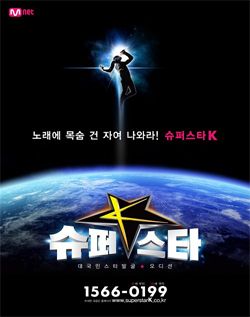 Do you want to be a star? Then try your luck and show your talent at the auditions for "Superstar K", the Korean version of "American Idol". The talent search show began accepting phone applications for the show on Monday, but the ARS phone service (1566-0199) were suspended for two hours, because of an overwhelming number of calls made to register for the audition. Over 5,600 applicants registered over the phone and the Superstar K homepage (www.superstark.co.kr) saw over 400 thousand hits in just a few hours. The show's organizer, Mnet Media, said that they never dreamed of such explosive responses. They're in the process of installing more ARS lines.

Applicants to the audition come from a variety of backgrounds and age groups. The youngest applicant so far is an 11-year-old boy and the oldest is a 90-year-old man. Those who call in have to sing on the phone and internet users need to post UCCs or self-made video clips to undergo the first screening process. On-site auditions will take place in eight cities nationwide, starting in Incheon on May 3 and touring Gangneung, Jeju, Daejeon, Daegu, Gwangju, Busan, and Seoul. The first preliminary round will select 32 people, who will be pared down to ten. The final winner will be chosen through an elimination process, which will be aired through Mnet, a cable music channel.