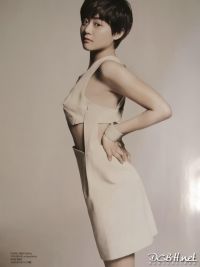 Reporter: How were you cast in the movie "I Don't Need Love" ("Love Me Not")?

Moon Geun-young: I watched the Japanese TV drama in CDs in my management firm's office when I came to Seoul after finishing the college entrance exam and found it very attractive. Maybe it's because there was an affinity between me at that time and the Ryu Min character.

Reporter: An affinity with the depressed character? You are so sunny and positive.

Moon: Well, it's distrust in the world. I had received rewards for the efforts I made, and I lost any desire to do something when I wasn't rewarded for doing my best in preparing for the exam. I felt I could express what was pressing me down inside through Min.

Reporter: The evaluation of your acting in this movie seems significant.

Moon: I'm waiting for it. I'll accept anything: reproaches, critiques, or advice. That's what I can do and must do because I'm now in my 20s. It will be an opportunity to take one step further.

Reporter: What do you think your weaknesses are as an actor?

Moon: There are a lot. I feel I'm not good enough in doing the basics like speaking, breathing, voice tones, facial expressions, actions and delivering emotions.

Reporter: Don't you have any desire to be in the so-called "boring art movies"?

Moon: Frankly speaking, I've had it. But I also think it is the right thing to do now to show what I can do best at my age. I don't want to consume myself fast. I want to go slowly.

Reporter: Last year, you said, "An actor can become anything except oneself". It sounded a little sad.

Moon: I wished who I am in my fantasy were real me because I didn't like real me. I wished I had certain aspects of the character I'm acting, so I tried to find them within me. I found I didn't have them and felt I'm not myself.

Reporter: What kind of books are you reading as a college student?

Moon: I read lots of novels before, but now I'm reading humanities books since I'm now a college student. The two books that occupied me for a while are E.H. Carr's "What is History" and "A Biography of Che Guevara".

Reporter: Do you have any role models?

Moon: Frankly, no. I just wanted to work steady like Jang Dong-gun. Recently, I went to the preview of "Radio Star", and it made me want to become an actor like Ahn Sung-ki. He made me want to get older fast.