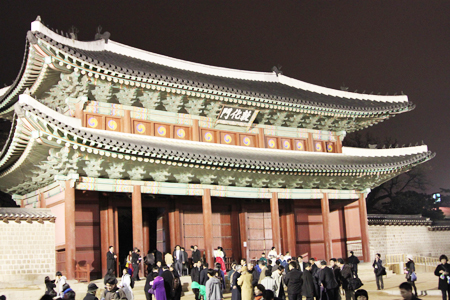 Changdeok Palace at night. Presidential Council on Nation Branding (PCNB) Chairwoman, Lee Bae-yong has led a special program taking students and foreign visitors to major historical sites including Changdeok Palace. Some of the sites are elaborated in this book. / Korea Times file

The Lee Myung-bak administration has made efforts to improve the nation's image abroad, resulting in the establishment of the Presidential Council on Nation Branding (PCNB) in 2009.

The essay writers come from all walks of cultural life, including "samulnori" (traditional percussion music) master Kim Duk-soo, museum directors, scholars, policymakers and columnists. But they write with one common goal, which is to introduce bits of Korean history as the key source of overseas promotion of Korea. 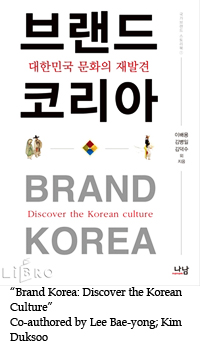 When planning this book, Lee said that the first question she had in mind was - what are the cultural assets that Koreans want to introduce to foreigners the most?

The former president of Ewha Womans University is a historian by profession and has been an ardent champion of proper history education for young people.

"To elevate Korea's national branding, we must spread our traditional assets to the world". Lee said in the introduction of the book. "Economically, we are one of the global leaders, as the seventh largest exporter in 2010. But our image, or our nation branding, is far from matching this economic status".

"Many Koreans are not aware of our own assets that can be used to promote our nation to the outside world. We must be more forthcoming to learn about what we have".

Lee is the author of the first essay on the leadership of King Sejong, one of the most respected sovereigns of the Joseon Kingdom (1392-1910), and his most notable achievement - the creation of "Hangeul" (Korean alphabet).

"King Sejong was a monarch who had an exceptional political philosophy and intelligence. He ascended the throne as the fourth king of the Joseon Kingdom in 1418, and led a golden age by the promotion of science and, culture, such as the invention of Hangeul, Lee wrote.

Under Lee's leadership, the PCNB has carried out a variety of activities to improve national branding, like a cultural convention on introducing "hallyu" content in August 2011. The organization is planning to use diplomatic landmarks like the 130th anniversary of Korea-U.S. relations in this year as an opportunity to promote hallyu.

She has often expressed her belief that that the roots of hallyu can be found in Korea's traditional culture, heritage and most importantly, passionate nature.

As president of the nation's largest women's university, she led a special program taking students and foreign visitors to major historical sites.

Some of those sites are elaborated in this book, such as the Changdeok Palace. It is introduced as the "most genuine Korean palace" in an essay by Choi Chang-deok, a former high official with the Ministry of Culture, Tourism & Sports. The UNESCO World Heritage site had been one of the official royal palaces of the Joseon Kingdom.

There are 22 essays, and after each essay, there is one-page abridgement in English.

The book covers various aspects of Korea's cultural tradition, but there are some parts of Korea's history that is missing, particularly the nation's 1,700 years of Buddhism. This is probably due to the fact that the periods covered in the essays are mostly Joseon. Buddhism was introduced to Korea in more ancient Kingdom of Goguryeo.

If the book had included the religious aspects of Korea's tradition, it would provide a more complete picture of Korea's culture.

"New book on nation-branding published "
by HanCinema is licensed under a Creative Commons Attribution-Share Alike 3.0 Unported License.
Based on a work from this source