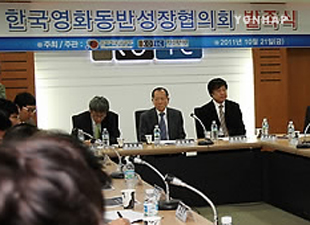 A new council has been launched to resolve the issue of monopoly by large companies in the domestic film industry.

The Korean Film Council on Friday held a ceremony in Seoul to mark the launch of a new council for mutual growth of Korean film industry. The new council is comprised of officials from the government, movie organizations and the domestic film industry.

The mutual growth council plans to deal with pending issues in the industry, including the cooperation between large companies and small firms and monopoly of large companies in film investment, production and distribution.

"New Council to Address Monopoly in Domestic Film Industry"
by HanCinema is licensed under a Creative Commons Attribution-Share Alike 3.0 Unported License.
Based on a work from this source