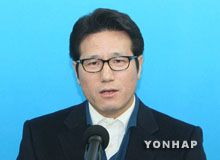 New culture minister Choung Byoung-gug has vowed his efforts to create an environment favorable for artists and writers.

Speaking at his inauguration ceremony on Thursday, Choung said that the culture ministry will select cultural content competitive in the global market though a fair and stern screening. He stressed the importance of culture in order for the nation to become an advanced country.

In addition, Choung placed emphasis on the quality of growth in the tourism sector, although the number of foreign tourists visiting the nation has reached almost ten million.