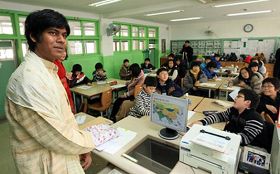 It has been over 10 years already since he moved to Korea to find work.

Back in 1999, he started his Korean life as a factory worker, but now he is more than busy working as a documentary producer for migrant worker TV, a ranking Migrant Worker Film Festival official, a multilingual translator of Bengali, Hindi, Urdu and English and also an actor.

What's more, he has been working since 2007 as a multi-ethnic culture educator at elementary schools in his neighborhood.

"The number of non-Korean residents living in this country surpassed a million. So much so, many people call Korea a multicultural society and no more a homogeneous society as before. It would be great if all expatriates were accepted as true friends and companions in our society", he said to the Korean government's media.

In 2008, the Ministry of Culture, Sports and Tourism, jointly with the Korea Arts and Culture Education Service, launched a "multiculturalism teachers' training course", and Mahbub Lee became one of the first graduates of the program.

Every weekend he visits elementary schools near his home and teaches the pupils about Bangladesh's traditional culture, such as special foods for the New Year holiday. He also helps students from multicultural families adapt better to the school environment and society as a whole.

Among Mahbub Lee's alumni of the training course is Mirja Maletzki from Germany. She is also a regular guest at the KBS talk show program "Chitchat of Beautiful Ladies".

Mirja, who has been in Korea for 5 years, is known among program viewers to be superb in explaining the differences between Korean and German culture, based on her own experiences.

The biggest cultural difference of sorts is the Korean conception of "us", Mirja said. "I enrolled in a taekwondo class to learn self-defense skills when I came to Korea. And the kids at the gym called me "nuna" (elder sister in Korean). I was emotionally touched, thinking that I had come to have a new family, which helped me a lot to fight loneliness in a foreign country".

Mutual respect for different cultures is important in inter-cultural communication, she also said.

The number of elementary school kids from multicultural families is currently estimated at about 70,000 in Korea.

A culture ministry official said that, as Mahbub Lee explained, the biggest problem for those children is adapting to Korean society.

Rather than focusing on immigrants' naturalization, immigration policies should concentrate more on opening up Korean children's recognition about other cultures, said the official.