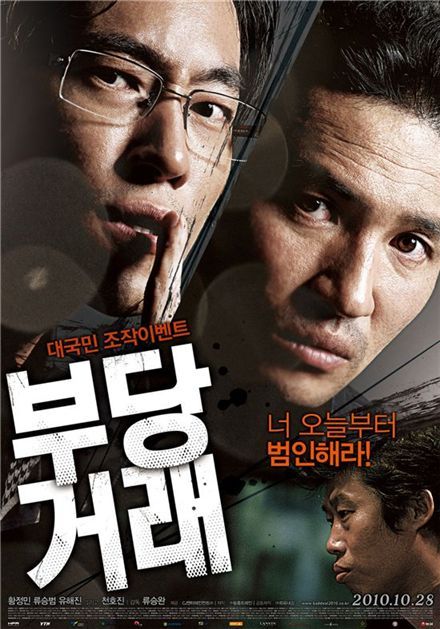 New Korean film "The Unjust", which opened on Saturday, took the top spot on the box office during the weekend of October 29 to 31.

Data released by the Korean Box Office Information System (KOBIS) showed that "The Unjust" which opened in 573 theaters attracted a total of 616,496 viewers during the three-day period.

The new film, an action-packed thriller that delves into widespread corruption which occurs within a prosecutors' office, stars some of the biggest names in Korea including Hwang Jung-min, Ryoo Seung-bum and Yoo Hae-jin.

"Legend of the Guardians: The Owls of Ga' Hoole", another newcomer distributed by America's Warner Bros., claimed second place on the box office with 147,702 viewers.

The pic is a computer-animated fantasy adventure film based on a novel by Kathryn Lasky.

Starring Soo Ae and Yoo Ji-tae, "Midnight FM" is a suspense movie about a radio deejay forced to confront a psychotic killer who intrudes into her house during a live broadcast of her show.

Other films that placed within the top 10 of the chart were "Paranormal Actvity 2", "He's on Duty", "Cyrano Agency", "Letters to Juliet", "Wall Street 2: Money Never Sleeps" and "Reign of Assassins".

"New local film "The Unjust" tops weekend box office chart "
by HanCinema is licensed under a Creative Commons Attribution-Share Alike 3.0 Unported License.
Based on a work from this source