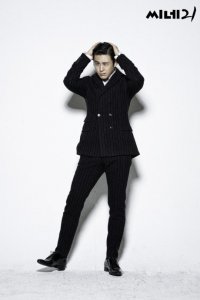 In 2004, a group of the nation's central theater figures pooled their strength and put on 15 carefully prepared works on the stage, one after another, in the span of one year. The response was amazing for a genre that has never been very popular, drawing some 170,000 people and an average 81 percent seat-occupancy rate.

Those people have been at work again since late last year, this time to offer 11 top contemporary picks and to solicit help from well-known television and movie actors and actresses, in hopes that their appearance will further vitalize the drama genre.

The latest project from "Yeongeukyeoljeon 2", as the special production company is called, is "The Return of Mr. Um", a sequel to "At the Marina", which was presented in 2005 and won the Grand Arts Award from Arts Council Korea the same year.

The play, which will begin staging later this month, has been generating a lot of media hype after word got out that Go Soo, a major television heartthrob who recently finished his army service, is in it.

The casting of Go Soo as one of the key supporting actors was decided a couple of months ago, according to the production company.

"I was the first one to recommend that Go Soo come back to the audience with a play rather than a TV drama or a movie, because I thought it would be a good opportunity to make him feel humble", said Cho Jae-hyun, a veteran actor and a central figure of "Yeongeukyeolgeon", at a press conference on May 7. "After my army service, I feel like I have lost the sense of acting", Go Soo said. "I guess I will have to practice harder since I've longed to act on stage for a long time".

The play is directed by Park Geun-hyung, who has worked with numerous renowned actors and actresses and is well-known for his imaginative and realistic presentation of plays and musicals. Park said that, although Ko does not have any acting experience on stage, they decided to work with him in this piece because of Ko's humble attitude.

Ko will be working with such veteran actors as Theater Golmokgil's Um Hyo-sub, who will play the lead character.

Ko also said he is learning a lot from practicing for the play, and is having fun working with Park and the other actors from the Theater Golmokgil.

The script for "The Return of Mr. Um" has yet to be finished, according to the production company, since Park is known for adding and taking out little bits of the script during the practices, making each line and circumstance more apt for different actors.

This trait has helped Park earn a reputation as a director who finds the right actor for the right role, such as Park Hae-il in the play "Admiring Youth".

Mr. Um, played by Um once again following "At the Marina", is to be the central figure of the play. The plot concerns Mr. Um as he moves from Uleung Island to Pohang to run for mayor. It focuses on depicting his snobbishness and selfishness.

"I think the audience will find funny the dialects and humorous situations originating from an isolated place like Pohang, as well as a realistic depiction of political issues that arise in the play", Um said.