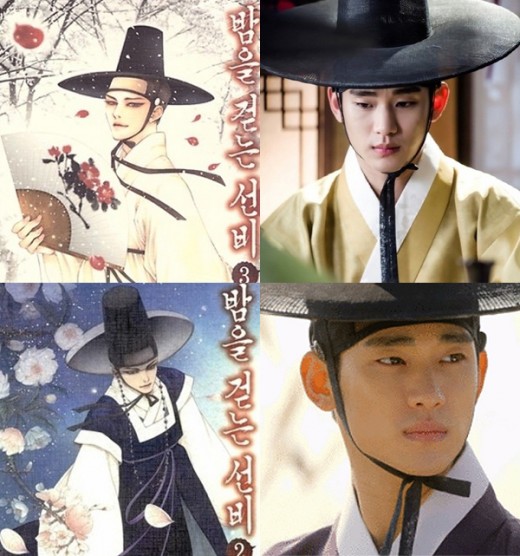 While MBC completed the planning to produce 'Scholar Who Walks the Night', an adaptation of web-toon with the same title, the production company said, "There is nothing decided for casting".

On February 2nd, a source from the production company, Contents K said, "Although there are several actors on the list including Kim Soo-hyun, nothing has been decided yet". The personnel tried keep things quiet and said, "While a lot of fans are wanting Kim Soo-hyun, we are not in the position to say anything yet".

According to the multiple sources from the production, 'Scholar Who Walks the Night' will air as MBC's Wednesday & Thursday drama in July most likely. It will probably air after the completion of the drama by Hong sisters which is scheduled to start airing in April.

'Scholar Who Walks the Night' is the latest work by Jo Joo-hee and Han Seung-hee, which was selected as Excellent Cartoon by Korea Creative Content Agency in 2014.

After a nobleman's family in Joseon era was ruined due to a false accusation for treason, a daughter from the family disguised herself as a man and went off to sell books to survive. During her adventure, she encounters a handsome, mysterious scholar, who is actually a vampire. The web-toon is based on the unique concept that a vampire lurks in a palace.

Contents K, which is a sister company of Keyeast Entertainment purchased the license for adaptation and is preparing to produce the drama. Currently, Kim Soo-hyun and Park Hae-jin are talked about as the lead.

Writer Jang Hyeon-joo of 'Coffee Prince' is in charge of the screenplay and Lee Seong-joon of "Empress Qi", 'May Queen', and "The Sun and the Moon" will direct the production.

"New upcoming drama 'Scholar Who Walks the Night' may star Kim Soo-hyun?"
by HanCinema is licensed under a Creative Commons Attribution-Share Alike 3.0 Unported License.
Based on a work from this source