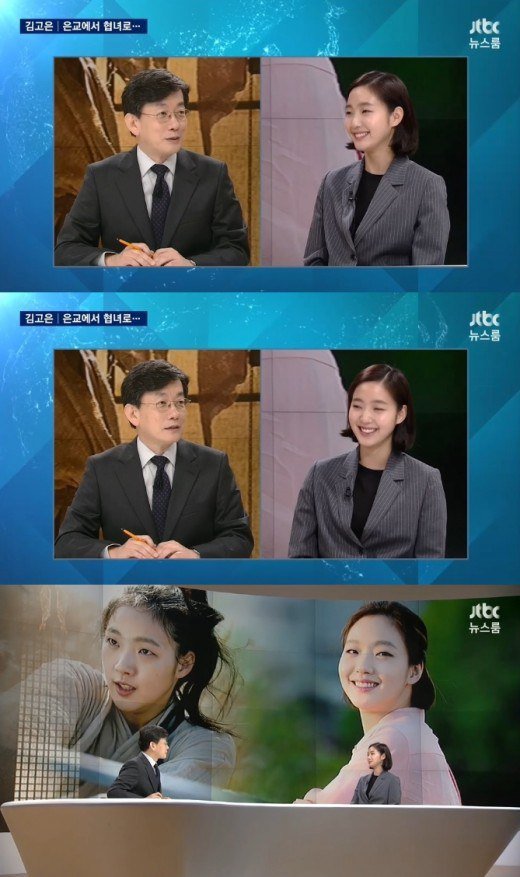 Kim Go-eun, Hong-seol in 'Memories of the Sword' appeared on the August 6th show of JTBC 'News Room', had an interview with anchor Sohn Suk-hee.

Since she debuted through movie 'A Muse', 2012, she swept various new actress awards and has emerged as a hopeful talent on Chungmu-ro. She later established the exceptional filmography including "Monster", 2012, and "Coin Locker Girl". Her outstanding performances have brought her to the position representing actresses in their 20s.

Especially, for her role in "Coin Locker Girl", which was released in last April, she was in spotlinght by being invited to Cannes International Film Festival. She will meet movie fans again through the blockbuster film, 'Memories of the Sword' this summer.

On this day, anchor Sohn Suk-hee spoke about his first impression on Kim Go-eun, who was the youngest guest to the news show so far, "You look just like a female employee I encounter often at our company. You look somewhat plain for an actress".

However, at the end of the interview, Sohn Suk-hee revealed his favorable opinion, "At the opening today, I told you that you looked plain like office employees. I was wrong. You sure do have glamours sides as an actress. I'll keep watching your activities from now on".

'Memories of the Sword' depicts betrayal by a man, set in the end of Goryeo era, when swords meant power, and two swords aiming at him 18 years later. It is a period action drama telling you about the inevitable destinies of the three swordsmen, who had different goals. Lee Byung-hun, Jeon Do-yeon, Kim Go-eun, Lee Junho (2PM) and others star in the movie. Director Park Heung-sik of 'Mommy, Dearest', 'My Mother, the Mermaid' 'I Wish I Had a Wife' directed the film.

The film will be released on August 13th.

"News anchor Sohn Suk-hee falls for Kim Go-eun's glamor "
by HanCinema is licensed under a Creative Commons Attribution-Share Alike 3.0 Unported License.
Based on a work from this source