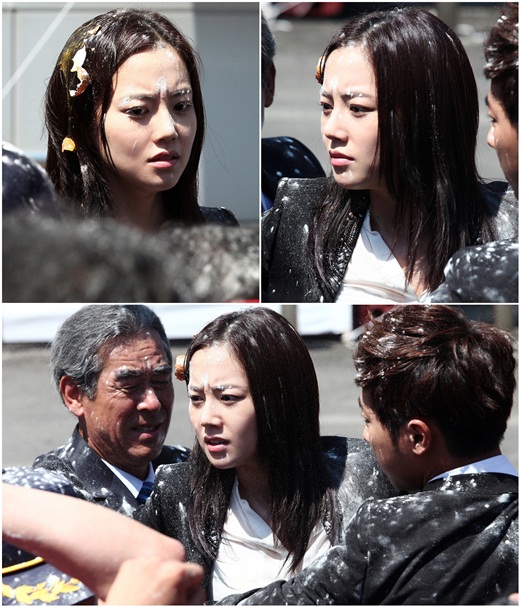 Moon Chae-won was seen covered in egg and flour.

Moon Chae-won from the new KBS 2TV drama "Nice Guy" was covered in egg and flour in following her muddy appearance previously.

This scene is one where Eun-ki (Moon Chae-won), the director in charge of Taesan Group is being criticized amongst a bunch of men who are protesting about something. Moon is trying hard to stay resolute but it's obvious what's going on is serious.

Apparently Moon was brave and endured this whole ordeal without bring shaken up, impressing everyone on site.

The crew says, "She wasn't disturbed by the flying eggs and flour at all but it was pitiful. High expectations go to her for her serious and passionate attitude towards the drama".

Meanwhile, "Nice Guy" is a mellow drama about the love between three men and women and the process of life. To be aired for the first time on the 12th at 9:55PM.

""Nice Guy" Moon Chae-won covered in egg and flour?"
by HanCinema is licensed under a Creative Commons Attribution-Share Alike 3.0 Unported License.
Based on a work from this source