'M COUNTDOWN-What's up LA' to be performed at KCON!

Leading the globalization of K-Pop, Asia's NO.1 music chart show "M COUNTDOWN" is to hit the US for the first time. CJ E&M introduces its music channel Mnet's flagship show "M COUNTDOWN-What's up LA" to the American audience as a part of K-Culture festival 'KCON 2013'.

Launched in 2012, KCON is the first-ever large-scale convention dedicated to the hottest entertainment coming out of Asia including K-Pop music Korean dramas and movies. KCON 2012 was a one-day event ranging from autograph signing sessions, celebrity panels to contests and fan workshops aimed at everyone from the super fan of K-pop and Asian Pop Culture to those ready to be initiated into the global Korean Wave. This year, 'KCON 2013' is to present a bigger size convention with various events. 'KCON 2013' is a two-day festival taking place from August 24th-25th in Los Angeles Memorial Sports Arena. 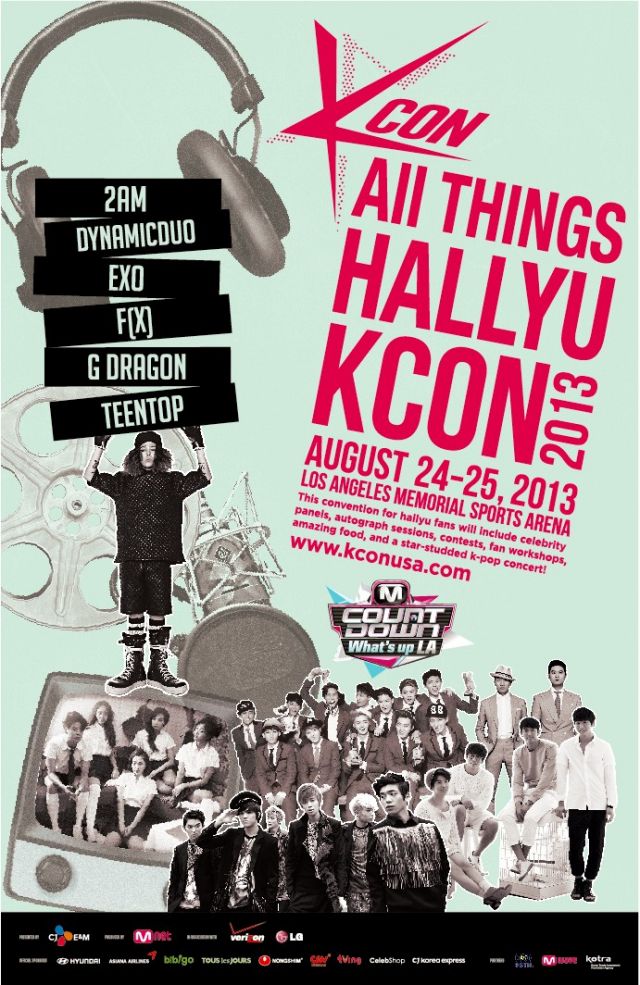 Korea's representative music channel Mnet introduces global tour of M COUNTDOWN since last year featuring outstanding lineup. It has become one of the most anticipated music festivals for a long time among those music fans throughout Asia for its advanced skills in stage and production management. Harmonizing both Korean and American pop culture, "M COUNTDOWN-What's up LA" is expected to show a music extravaganza with tremendously popular artists worldwide and their special performances in LA, the heart of the global entertainment industry. High profile K-POP acts such as G-Dragon, EXO, f(x), TEEN TOP, 2AM, Dynamic Duo will appear to show their charms that were not seen in any other Hallyu concerts.

Yoon Shin Hye, Chief Producer of "M COUNTDOWN-What's up LA" notes, "My team is very excited and awaited for this M COUNTDOWN since it is the first time visiting the US. With Mnet's exceptional skills in stage, production management, and unique collaboration performances, we are planning to make "M COUNTDOWN-What's up LA" as a global music extravaganza for all music fans around the world. So please look forward to seeing the event".

Organized by Asia's leading entertainment content company CJ E&M, KCON is North America's first and largest Korean pop culture convention. Since its inaugural event in 2012, KCON aims to improve the American K-Pop and Hallyu fan experience by providing a way for fans to connect with each other as well as artists and professionals in the K-Pop industry.

More information can be found at www.kconusa.com.

"No. 1 K-POP chart show "M COUNTDOWN" goes to Los Angeles in August!"
by HanCinema is licensed under a Creative Commons Attribution-Share Alike 3.0 Unported License.
Based on a work from this source