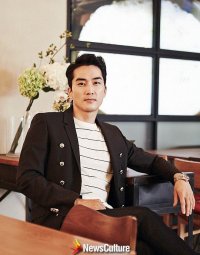 Actor Song Seung-heon, who made his name as a gentle, romantic lead in melodramas before he was drafted into the military, has changed. He has come back after a five-year hiatus as a tough guy, playing a man who joins the mafia to avenge his father in MBC drama "East of Eden". Watching him rage and burn while chasing the man who killed his father on a motorcycle, viewers have praised him for his true-to-life emotional acting.

After 14 years in the entertainment world, Song is still mostly recognized for his looks rather than his acting. "I know I'm known thanks to my looks rather than anything else", he said. "But I no longer care about that".

Having made his debut as a model for blue jeans in 1995, he rose to stardom overnight with his role in MBC sitcom "Three Guys and Three Girls". "I started acting unprepared without thinking much about it", he said. "So I still sometimes feel I'm dreaming when so many fans show their love for me".

Gently prodded about the scandal surrounding his attempt to dodge the draft, the 32-year-old says, "It was one of the most regrettable things in my life. In the military I often thought about the importance of being humble and taking things as they come".

But his fans remained loyal -- he got boxes of letters every week, totaling tens of thousands by the time he was discharged after two years.

Song, like Bae Yong-joon, is more popular in Japan than in Korea -- thousands of Japanese fans came to see him when he was discharged. "I'm happy and at the same time it's a lot of pressure when Japanese fans come to Korea to study because of me", he says.

Now he tries to think and act simply, taking advice from director Yoon Seok-ho of "Autumn in my Heart", the drama that made his name in Japan. Yoon "told me that I shouldn't try to look cool or handsome when I'm acting. The most important thing, he said, is to act sincerely and truthfully. I think I can do that now".