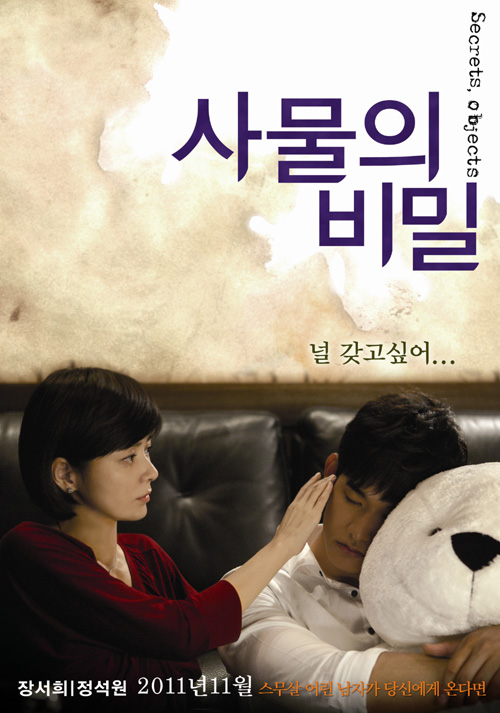 "Secrets, Objects" is suffering from the issue about the number of theaters and cross screenings.

According to the Korean Films Commission on the 22nd, Jang Seo-hee's "Secrets, Objects" started screening in 27 different theaters on the 19th and gathered 368 audiences. This movie was released on the 17th but is putting up with the accumulated number of 3958 and in 19th place of the box office.

"Secrets, Object" is a secret love story between forty-year-old sociology professor Hye-jeong and twenty year's younger boy who volunteered to help out in the lab, taken from an object's point of view.

Jang Seo-hee and Jung Suk-won's couple act, talented female director, shocking intercourse scenes and other's caught the attention of many but did't do so well since the first day of release.

However, through official media sources on the 21st, director Lee Young-mi criticized the distributors of the movie saying that it reduced the number of theaters to 20 without any notification as well as cross screened the movie.

In the media source, she said, "There have been increases of people who want to watch the movie since the 17th as rumor spreads. But I've been told that the movie couldn't be seen in theaters".

She continued, "I thought the distributors had agreed to screen the movie in 50~100 theaters but the number was greatly reduced to 20 a day before the release".

Director Lee condemned, "We lost theaters without agreement. There are only a few posters around Seoul and outside of it. Where can commercial movies stand?"

She continued, "Do you have to take away our fair chance in this game? I am crying tears of blood here. I want our 50 theaters back".

Song Hye-kyo as well has once suffered from cross screening with her movie "A Reason to Live" which was her first in 4 years.

"Now Jang Seo-hee after Song Hye-kyo"
by HanCinema is licensed under a Creative Commons Attribution-Share Alike 3.0 Unported License.
Based on a work from this source