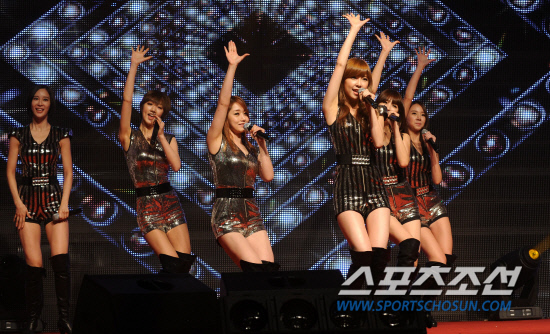 The New York Times published a feature article on March 5 on the secrets behind K-pop's worldwide popularity.

Under the headline "Bringing K-Pop to the West", the article talks about how K-pop is spreading and attracting audiences around the world. The genre "has spread, first to Asia and more recently to Europe, the Middle East and the Americas, mainly because of the broad use of social media", it said.

"When bands like 2NE1, Super Junior and SHINee hold concerts in Europe and the United States, tickets sell out within minutes, and fans have used Facebook and Twitter to organize flash mobs demanding more shows", the article reported.

Besides social media, the NYT credited lyrical hooks that are easy to memorize and the hard work and talent of band members, taking Nine Muses as an example.

The paper reported on the intense practice regime that the girls have to go through, a program they claimed to have followed for 10 to 12 hours each day, seven days a week, for the last several years.

"They practiced synchronized dance routines that were executed precisely" so they can be associated with "goose-stepping" North Korean soldiers, but "with an infectious sense of joy", it said.

It also highlighted fierce competition among group members as they can be easily replaced if they don't train. There is also a strong desire among each to become the "leader, who dances at the head of the formation". It cited a member as saying, "It's training, training and more training".

However, K-pop has not yet made a lasting impression on many Americans, the NYT claimed.

"Not everyone is convinced K-pop has staying power in the United States", it wrote. It quoted Morgan Carey, a Los Angeles-based music consultant, as saying, "The way into American pop culture is through fashion and film". Carey cited Rain, who added an edgier side to his public persona by starring in "Ninja Assassin", and Wonder Girls as shining examples backing up his theory.

"NYT Dissects Global Success of 'Goose-Stepping' K-Pop Singers "
by HanCinema is licensed under a Creative Commons Attribution-Share Alike 3.0 Unported License.
Based on a work from this source