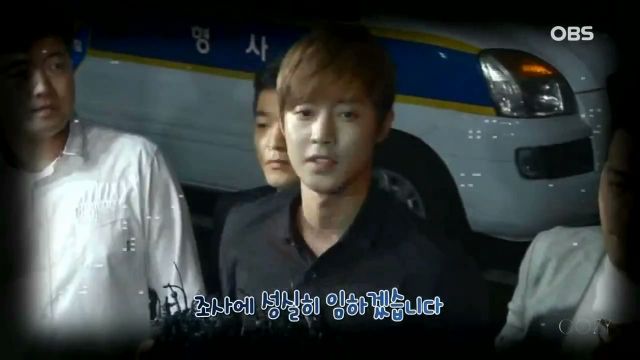 (Caption Q: How is Choi's condition?)

When we [the two parties] went to Asan Medical Center together, she was confirmed in good health and I know she continues to visit the clinic. As she is pregnant and waiting for the delivery in the near future, she is currently concentrating on prenatal care.

Reporter:
On the first day of hearing, Choi's side stated that she has been focusing on pre-
natal care. Sometime after that, Kim Hyun-joong's parents raised questions about the current pregnancy as the ultra sound pictures did not display her name and the time discrepancy between the actual check-up's time and the time of the pictures were taken.

Hospital staff:
There's a separate area for ultra sound pictures, where there are many machines.
Some are old and some are new. It's different from one machine to another. There are times the names are marked, but other times they are not.
Ultra sound pictures are important materials as they show how many weeks the fetus is in and when the delivery will be made. But truth is not known yet and questions are building up.

Attorney Lee:
When we get the ultra sound pictures, the weeks of pregnancy can be estimated by
the size and the shape of the embryo sac. That's why we requested ultra sound pictures. Because they are unmarried, paternity has to be confirmed. Ultra sound pictures are one of many ways to confirm paternity but all we received were questionable ones, not the ones we hoped to receive, so we still have our questions about paternity unresolved.

Reporter:
In this midst, on the 3rd, Choi's delivery date, that can be used to estimate the impregnation time, is made public. It is Sept. 12.

Reporter:
Kim Hyun-joong's side maintains that he will take responsibility as father, when his paternity
is confirmed after the delivery on Sept 12.

Attorney Lee:
Kim Hyun-joong's side has maintained an unchanging position that he will be responsible as a father once paternity is confirmed. It's to support the child, like child support alimony.

Reporter:
The expected delivery date is now known and there's the child support issue. What is Choi's position about them? Our staff tried to reach Choi's legal counsel, but he was unavailable for response. The next day on 4th, Kim Hyun-joong's side announced their determination to countersue Choi. The critical reason for counterclaim is because Choi's claim of miscarriage after pregnancy in the past is proved to be untrue.

Reporter:
During the time that she alleged her pregnancy, there were such circumstantial evidences as she consumed alcohol, rode bike, and took x-ray pictures. But when the statements of fact were returned from the hospitals, it is found that past pregnancy and miscarriage are not actually facts.

Attorney Lee:
According to the retuned statements of fact, we received responses that the claim of pregnancy and miscarriage by assault in May last year was false. It's a fact that she was never pregnant. It is a fact that she did not receive any treatment for miscarriage. Also for the 2 week injury medical certificate, there's no diagnosis of injury by belly assault. So because all these are falsehoods, we will submit the returned statements of fact as evidences.

Reporter:
Kim Hyun-joong gave the 600MW settlement because he was in despair believing Choi's words of miscarriage by assault. But as the claim is found false, the counterclaim is determined. Also the counterclaim will include the minimum of 1.2BW for damages.

Attorney Lee:
As the other side got 600MW by blackmailing with false claims, we will countersue for 600MW. It is the other side that breached non-disclosure of settlement, as they stated they didn't receive the settlement even after they did receive it. So demand will be made for 600MW penalty. Also even though miscarriage by assault is untrue, she received an interview with media this year that claimed she miscarried due to repeated beating on the belly by Kim Hyun-joong during her pregnancy in May last year. So she had been answering the interview with a false claim and defamed Kim Hyun-joong's reputation, so defamation damage will be included. It will be 600MW and 600MW plus defamation damage, which the amount has not decided yet. So the counterclaim will be filed over the amount of 1.2BW.

Reporter:
On the first hearing date, Choi's Attorney Seon expressed his surprise for the possibility of Kim Hyun-joong's counterclaim.

(Caption Q: What's your response to the possibility of Kim Hyun-joong's counterclaim?)

Attorney Seon:
I was a bit surprised to see the report about it. But we should not close our eyes in front of truth.

Reporter:
After the news of the counterclaim decision, Choi's side maintains that their position will not be made public until the second hearing date. The second hearing is scheduled on July 22nd for the 1.6BW lawsuit against Kim Hyun-joong.In the second round of unending legal dispute, attention is being given to whose hand the court will raise.

Proofread by: Nikita and Hazell