Ock Grows Into Her Role in '42nd Street' 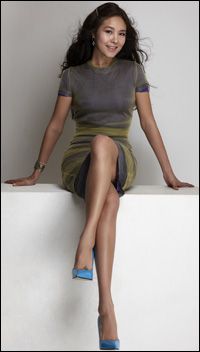 When Ock Joo-hyun, the former lead signer for the now disbanded top female pop group Fin. K. L., first appeared in the musical, "Aida" in 2005, many people thought her name might have helped her land the title role.

But in her roles as the passionate, independent-minded princess in "Aida", the glamorous cat Grizabella in "Cats", the night club dancer Roxie Hart in "Chicago" and the pure chorus girl in "42nd Street", the singer-turned-actress has proven herself and has grown in every role she has been cast in.

Currently performing in "42nd Street", Ock immediately dazzles with her brilliant tap dance but she has also impressed audiences with her ever-improving acting.

"First, when I took the role of a young naive chorus girl, Peggy Sawyer, from a small town, I worried because the character is so different from my previous role, the sophisticated Roxie. But while I am playing the role, it's rather a lot easier to perform the contradictory character for me", Ock said in an interview with The Korea Times.

Looking confident, frank but serious in her work, she revealed her enthusiasm and happiness for her successful transformation from singer to musical actress in her second "golden age".

In the ongoing show, she not only dances and sings but also portrays a naive but animated and vigorous girl. "The typical image of Peggy might be cute as Lim Hye-young is. But I am taller than her, so I thought my Peggy might look different. I just infused animated and undaunted spirits of Candy and Hany (both female protagonists in Korean cartoons) rather than the set cute image", she said.

Ock performs along with other veteran actors Park Sang-won, Kim Bup-rae and Park Hae-mi in the show.

The musical is a typical Cinderella-type story depicting how an unknown actress later becomes a famous musical star. But it gives the audience a hopeful message as it shows how the characters make it through their difficulties, and realize their dreams. The musical also focuses on the efforts of famed dictatorial Great White Way director Julian Marsh to mount a successful stage production of a musical extravaganza at the height of the Great Depression.

The show is renowned for its flamboyant tap dancing, exuberant costumes, speedy set changes and memorable musical score. Among others, the most fascinating scene is the group dancing, filling the stage with spectacular routines, starting with forty pairs of feet tap-dancing away as the curtain slowly rises for the first act. Ock shines in the group tap dancing scenes in the latter part of the show.

She began learning tap dancing six months ago. "It was really hard to practice and first I thought it was impossible to master it but it works now", she said.

For the successful performance, the 29-year-old actress emphasized the importance of the harmony among actors. "It's like making a snowman. As we can make a solid snowman only when we are rolling a small but good snowball from the start. The musical also is like the process of rolling a snowball with cooperation of all the actors on stage", she said.

As part of a cast of veteran actors, she has never been lazy in participating in the rehearsals and practices. "I don't want to be seen as just a guest or an outsider by other colleagues. So I had to make more effort in practicing than that of other veteran actors", said Ock.

"If I behaved like a celebrity here, I might have been ignored by them. But I am very aggressive to learn even a small thing and ask them totally as a novice. So they were beginning to open their minds and help me a lot", she said.

Ock is devoting her entire focus to the musical. "It's my foremost rule for my musical career. If my album release coincides with my musical rehearsals, I will give up the album promotion activity in television shows", she said.

Concerning the current trend of celebrities' moving to the musical scene, she said she has witnessed many cases where stars skip the rehearsals and eventually fail in the performances.

"The musical will reflect the effort I've put in and how much time I have invested in practicing. It is difficult and requires responsibility. So I told them if you're not ready to engross yourself in training and practicing, never dream of it", she said.

But she said her past experiences have ultimately contributed to her musical ability. She is able to take advantage of experience in singing classical music in her youth, which gives her the talent to freely cross genres from soul to pop and sometimes operatic music.

"I think the local musical scene lacks in genre diversity. We can see very diverse genres of musicals from rock, soul to opera, in other countries. On that score, I am very lucky to cover the wider range of the genres", she said.

When asked about her rival, Bada (Choi Sung-hee), a member of girl group S.E.S., who is also performing in the musical "Notre Dame de Paris", she said, "I think we are encouraging to each other. We both share the idea that we should not downgrade the musical quality".

She recently attended a workshop in New York for the musical project, "Tears from Heaven" composed by Frank Wildhorn. "It was the best of the best in Frank Wildhorn's works. But it's very difficult for the actors as they should dance, act and sing altogether very well. The cast has not been decided yet, but the musical will be absolutely superb", she said.

If she is given another chance, she wants to perform in "Aida" once again, saying she was too young and inexperienced at that time. "If I do Aida again, I am sure I can do the role very well because I built up some experiences and learned something. I think the musical is charming because it's new and fresh everyday whenever I stand on stage", she said.

The musical is based on the book by Michael Stewart and Mark Bramble, with lyrics by Al Dubin and music by Harry Warren.

Since 2004, the upgraded revival of the 2001 production has toured Korea and other countries. The revival production was upgraded from previous versions with more splendid costumes colored with gold and silver tones and adorned with spangles, and innovative stage sets, which are designed to shift quickly to the next scene.

The present version follows the 1980s original classic version, which focuses more on the drama, emphasizing a solid storyline.

Also, the orchestra will perform impressive musical scores such as "We're in the Money!" "Shuffle Off to Buffalo" and "Lullaby of Broadway".

"Ock Grows Into Her Role in '42nd Street'"
by HanCinema is licensed under a Creative Commons Attribution-Share Alike 3.0 Unported License.
Based on a work from this source