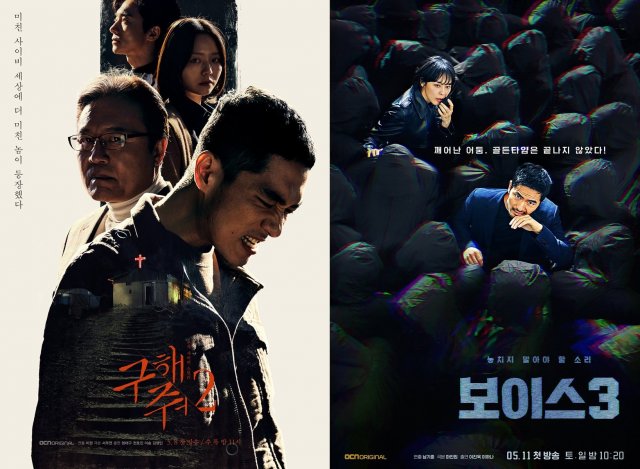 Will the reputable OCN restore its pride with qualified series?

The OCN dramas "Possessed" and "Kill It" ended last month. "Possessed" is a spirit chasing thriller about ghosts and "Kill It" differentiated itself from others with fancy gun-based action and stylish footage.

Each drama had OCN characteristics and unique subject matter, but the results weren't that great. The actors' performances were well received, but the dramas left a lot to be desired in terms of popularity and scalability.

OCN challenges itself with "Save Me 2" and "Voice 3", which are sequels of already successful dramas. "Save Me", which began its first season in 2017, will be back on the 8th of May with a second season with new stories and faces. It is based on the original animation "Pseudo" by producer Yeon Sang-ho, who will participate in this season as the creative advisor.

"Voice", which re-wrote OCN history, is coming back with a third season. This sound-tracking thriller about 112 reporting center agents defending the 'golden time' of crime scenes has been in the making since season 2. Lee Ha-na, Lee Jin-wook, Son Eun-seo and Kim Woo-seok come together once again.

OCN is growing as a genre expert over the years, but there are definitely hardships. First of all, there is a huge gap in audience ratings as well as the popularity of every drama. It is true that new series, which lack a degree of completion compared to branded contents, fail to draw that much attention.

A more serious matter is that the nature of OCN is thinning. This isn't just OCN, but the changed drama market is cited as a big reason, with more than 130 dramas being produced every year. In the past, there were contents that only OCN could do, but currently, it is decreasing in differentiation, as new genres form on general programming channels and other cable channels.

OCN's rivals are not only domestic dramas, but also overseas ones with a strong genre. Moreover, growing OTT platforms such as Netflix, which has a number of foreign dramas, are expected to affect OCN and its future standing.

Sources say the OCN genre used to stand out, but recent dramas created some disappointing results. OCN is trying to differentiate itself by developing a new season for their existing IP or steadily producing content that matches its channels, such as the 'Dramatic Cinema' project. However, there is also a need to be more active in order to attract changing content consumers.

"OCN Aims to Restore Pride with Proven Sequels "Save Me 2" and "Voice 3""
by HanCinema is licensed under a Creative Commons Attribution-Share Alike 3.0 Unported License.
Based on a work from this source