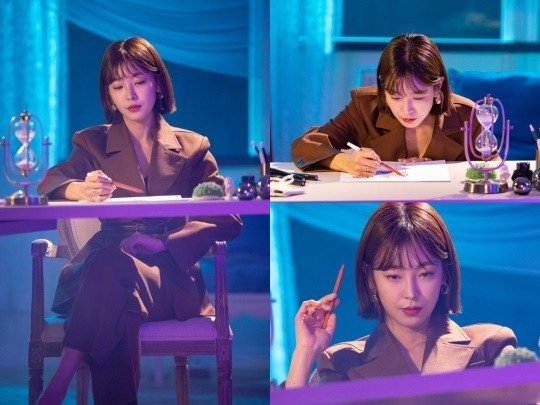 She plays Yoo Bella, a worldwide fashion designer in the new Channel A drama "Oddball! Chef Moon", which begins on the 27th of March.

Yoo Bella is the worldwide famous fashion designer's working name, while her real name is Yoo Yoo-jin. Yoo Bella is from an elite school and received the spotlight since her genius collection debut show. Despite her fame, she stays mysterious by not revealing her face.

In the following stills, Go Won-hee is dressed up perfectly in a suit and is working on her design. She's lost in thought at her design as she sits back to look at her sketch. Her bold attitude and impenetrable aura increase the character's appeal.

"Oddball! Chef Moon" begins on the 27th of March.

""Oddball! Chef Moon" Go Won-hee Becomes a Charismatic Fashion Designer"
by HanCinema is licensed under a Creative Commons Attribution-Share Alike 3.0 Unported License.
Based on a work from this source