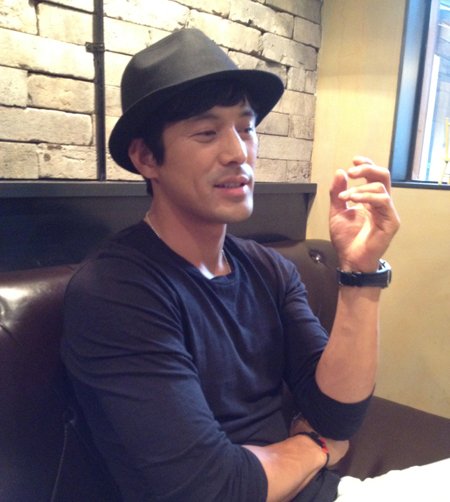 Ask any Korean entertainment fan about heartthrob actor Oh Ji-ho and you would most likely receive an answer related to his signature smile.

The singular focus on his facial expression - as well as his even more famous dimple - has been a mixed blessing. His good-guy image led him to be typecast in romantic comedy roles for most of his 15-year career, hitting a peak in MBC drama "My Wife is a Superwoman" (2009), where he played the nice but not so bright husband to co-star Kim Nam-joo's character. Then, in 2010, he wiped out that stereotype, playing an extremely serious general in period TV series "Chuno" ("The Slave Hunters") on KBS.

It does not seem a coincidence that he returns as another Joseon Kingdom (1392-1910) warrior in the ice-stealing comedy "The Grand Heist" (Korean release title: Gone with the Wind) by Kim Joo-ho, yet according to Oh, he only thought about the bigger picture before accepting the role - putting aside the risk of falling into another typecast trap.

"I was filming a drama co-produced by Korea, Japan and China last summer when the director approached me about playing Dong-soo", he told The Korea Times in an interview Friday. "I loved the chemistry between all the characters. If the ice CGI (computer-generated imagery) comes out really well, I thought the film could be a hit. I would be the only serious character with a period feel. Outside the action scenes, the interaction between leads (with Cha Tae-hyun's Deok-mu) seemed great. If that came out well, too, we were good to go".

His analysis of the part was just as thorough, especially from the perspective of a working screen actor.

"The most difficult thing about my role is his serious period feel or tone. I didn't have many comic scenes, and so what if people get bored with them? I had to think about what was ending up on the cutting room floor".

So what does he think about the end product, which had an excellent box office debut with over a million people through the doors on the first weekend? "I'm happy", he said. Then he added, "People around me are saying this is my best movie yet".

At age 36, as an actor whose career has been swayed greatly by image - popular perception of which roles he fits - he would not be faulted for expressing some frustration. But there was not even a hint of discontent during the interview, at least not one that he would let slip. His smile sometimes looked like a way to keep things in.

"When an actor reaches a certain age, like me, the image is to get good parts, to move the audience's emotions and to perform well. Viewers come for that.

"I think going with the flow, adapting to the times is best. It's no use to be nostalgic about bygones or point fingers to problems of right now, for me. I just think about how I can fit in".

But he admitted to having no qualms about voicing his opinion on set, all the while being mindful of the delicate balance between the actor and the director.

"I am careful with first-time directors, as they can be intimidated by actors' requests. Too many cooks spoil the broth, right? But the director here was clear about what he wanted. So I convinced him at times to take two shots (one following the directorangle and another with Oh's)".

Oh has an uncanny memory. He remembers, among others, the day he first felt the urge to act during his high school years in Mokpo, South Jeolla Province.

"I originally wanted to become a Korean literature teacher. But when I saw 'A Moment of Romance' (directed by Benny Chan and produced by Johnny To), Andy Lau lighting up his Marlboro, riding on the motorcycle and a drop of blood flows from his nose, that was it".

His determination was never questioned again. Once his parents objected to his theatrical pursuits, he went to a community college "to be done with studying and start working as soon as possible". After his obligatory military service was done in 1998, at age 22, he put all his eggs in the acting basket.

"This is my sixth film as a lead, my seventh overall. It's not the same as back then. Embarking on a project with knowledge is obviously different from going in with just a young passionate heart".

Now, 15 years into his career, he seemed to have firm control over the direction of his life and profession.

"I tend to plan things ahead. I wake up early, and when I think some things need to be done that day, they will be done that day. I used to be called out all the time for my acting, how poor my performance was. So even with a lot of risks for a newbie, I took a year and a half off to start anew. I've never thought about becoming popular, becoming a star. That was not important to me. I was only interested in upgrading my performance.

"I hope this will be the stepping stone for my next film. It's not every day an actor can meet a film with the potential for 4 or 5 million people in theaters".

"The Grand Heist" is now in theaters nationwide. Runs 121 minutes. Rated 12 and over. Distributed by Next Entertainment World.

"Oh Ji-ho: shrewd actor hidden behind dimples"
by HanCinema is licensed under a Creative Commons Attribution-Share Alike 3.0 Unported License.
Based on a work from this source