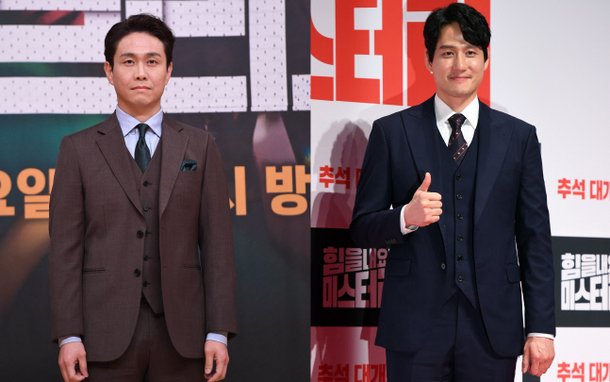 Actors Oh Jung-se and Park Hae-joon are confirming their popularity with news of leading roles in films.

Oh Jung-se recently confirmed his casting as the title role of the new drama "Uncle", which is scheduled in the second half by TV CHOSUN, and will showcase his first major drama. Earlier, Oh Jung-se became a popular actor who captivated the hearts of not only the industry but also fans with his nonstop work that led to KBS2's "When the Camellia Blooms", SBS' "Stove League", tvN's "It's Okay to Not Be Okay" and JTBC's "The Good Detective".

"Uncle", a remake of a popular BBC film of the same name, is about an uncle who takes on his elementary school nephew who suffers from anxiety disorder and obsessive compulsive disorder due to the divorce of his sister. Oh Jung-se plays the role of Wang Joon-hyeok, a loser unemployed musician who stands on ledge due to betrayal and fraud, but suddenly jumps into childcare, taking care of his nephew who appears out of nowhere.

In addition, Oh Jung-se, who proved his unrivaled acting skills with various characters in his previous works, is well-known for his works and is considered a guaranteed success in anything he appears in. Expectations are high that Oh Jung-se will show his potential again with the new drama. An official from "Uncle" also raised expectations, saying, "The trustworthy Oh Jung-se will make an all-time change in acting with deeper emotional lines and expression".

Actor Park Hae-joon, who became a national 'man of affair' with JTBC's "The World of the Married" last year, will also present his first drama lead. Park Hae-joon will release his first solo lead role with JTBC Studio's "I Have Not Done My Best".

"I Have Not Done My Best" is an original Japanese cartoon in which a 40-year-old Korean head of household who is forced to 'do his best in duty, dedication, and responsibility but decides to courageously wander around to find himself. Park Hae-joon is Nam Geum-pil, a middle aged man in his 40s who quit the company without any countermeasures and becomes unemployed under the name of an aspiring cartoonist, and will become an icon of mental victory that says, "I Have Not Done My Best".

In particular, Park Hae-joon raised public awareness by leaving a strong impression of his acting as a man of affair in "The World of the Married". Park Hae-joon's acting transformation is also looked forward to as it is said to be a pathetic but comical character who deserves support in the new drama.

An entertainment official said, "Oh Jung-se and Park Hae-joon have become actors who give trust no matter what characters they play, as they show their acting skills that make supporting characters stand out as much as the main characters. However, it has a symbolic meaning to be listed in the No. 1 spot in dramas. They may well establish themselves as leading actors in the small screen through this opportunity. Even if actors with acting skills often play important roles based on their skills, it is difficult for them to stand up to the lead role, but Oh Jung-se and Park Hae-joon are hope for upcoming actors".