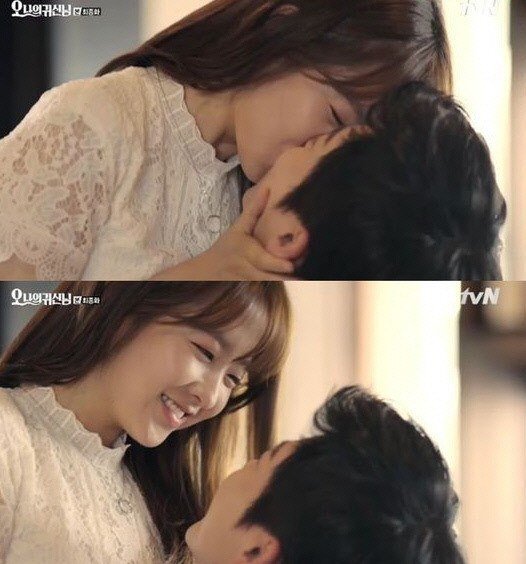 In Park Bo-young's most recent drama "Oh My Ghostess", she starred as Na Bong-seon, a girl who could see ghosts.

When Na Bong-seon was possessed by a ghost, she turned wild and intimate.

On the last episode of the drama, Na Bong-seon who just returned from studying abroad and Kang Seon-woo (Jo Jung-suk) had an intimate moment.

Bong-seon looked for Seon-woo but he was mad at her for not being in contact often. He said, "I guess you didn't have time to call me because you were too busy studying".

Bong-seon said, "I missed you so much I thought I might return to see you so that's why I didn't call". Seon-woo was happy to hear that. He held her up as he kissed her.

Bong-seon said, "Can we do that again?"

""Oh My Ghostess" Park Bo-young and Jo Jung-suk's kiss"
by HanCinema is licensed under a Creative Commons Attribution-Share Alike 3.0 Unported License.
Based on a work from this source