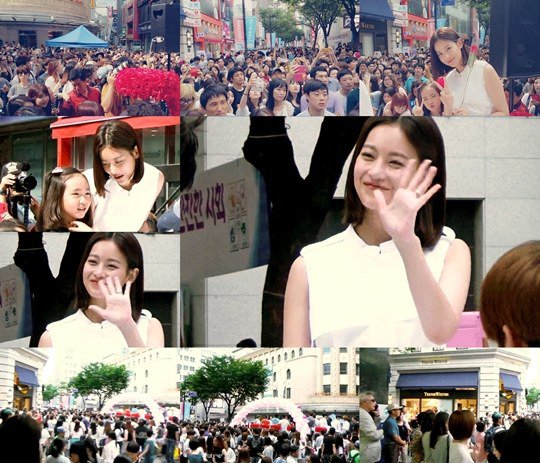 Oh Yeon-seo's popularity is rising with every moment.

She appeared at Myeongdong for the making of an episode of the MBC weekend drama "Jang Bo-ri Is Here!". The streets were crowded with people struggling to get a glimpse of Oh Yeon-seo. She was wearing a white outfit with her short hair down.

Even in the midst of all those people, Oh Yeon-seo checked her script again and again and rehearsed in a serious manner before the actual take.

Oh Seon-seo also took care of Kim Ji-yeong who plays her daughter Bi-dan in the drama.

Meanwhile, the drama is at its peak with the fact that Jang Bo-ri (Oh Yeon-seo) is the actual daughter of Bisulchae.

"Oh Yeon-seo's intense popularity"
by HanCinema is licensed under a Creative Commons Attribution-Share Alike 3.0 Unported License.
Based on a work from this source