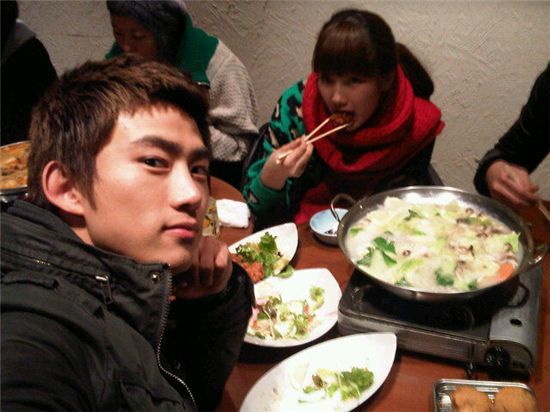 Korean idol 2PM member Ok Taecyeon has posted a picture of himself dining out with girl group miss A's Suzy, his co-star from upcoming mini-series "Dream High", on his official Twitter site (http://twitter.com/taeccool).

On Saturday, Ok Taecyeon uploaded a picture of himself and Suzy with the drama's staff at a restaurant in Japan with a comment below saying, "Jin-kook (played by Ok Taecyeon) and Hae-mi (played by Suzy) are having dinner!! We are pigging out in Japan~Make sure to eat a lot Suzy because you look tired~(laugh)"

The two artists flew into Nagoya of Japan last weekend to shoot several scenes for the show and will return to Korea tomorrow.

Making his debut in six-member boy band 2PM, Ok Taecyeon made his acting debut with a role in hit KBS2 TV series "Cinderella's Sister" alongside Moon Geun-young in June this year.

He was recently in Japan with the rest of his bandmates to officially begin their singing career in the country with the release of their first DVD titled "Hottest~2PM 1st Music Video Collection & The History~" and showcase.

Suzy, 17, is the youngest member of the four-member girl group miss A. The girls made a splash into the local music scene with their debut single "Bad Girl Good Girl" released in early July this year and followed it up with their latest song "Breathe".

"Ok Taecyeon dines with "Dream High" co-star miss A Suzy"
by HanCinema is licensed under a Creative Commons Attribution-Share Alike 3.0 Unported License.
Based on a work from this source