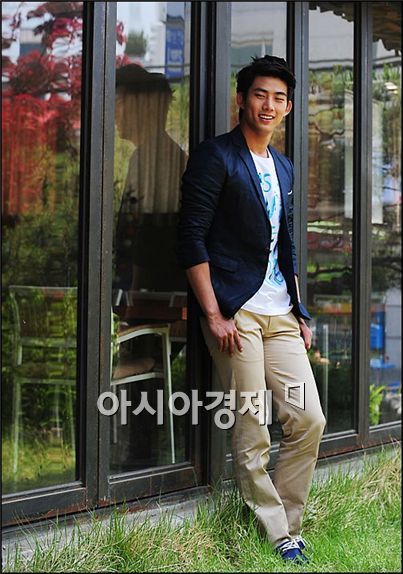 Ok Taecyeon of popular boy band 2PM has revealed that he has not had a single girlfriend since making his debut, dismissing recent rumors that he is dating Yoona of Girls' Generation.

The singer sat down for an exclusive interview Asia Economic Daily, held at a coffee shop in Seoul's Apkujung district on Monday morning, opening up about his personal life.

When asked what his first question to an actor would be if he himself was a reporter, the 21-year-old star responded, "I would ask if he has a girlfriend".

"I had one when I was a trainee [at agency JYPE], but I haven't had any girlfriends after making my debut", the pop idol said in response. "It's not like the agency forbids me from dating anyone, but strangely I haven't been able to get one".

Ok Taecyeon and Yoona recently sparked dating rumors when they appeared as a couple in a promotional music video for a water amusement park.

He admitted that they are "close friends" but added, "We are both busy... We haven't had any chance to meet in private settings".

He also said he is "closest to Girls' Generation out of all the girl groups" but stressed that they had only met for work and "rarely met on a personal level".

He went onto say, "I know about the rumors surrounding me. But there are many that are totally out of the blue. It is amazing how such stories get made up".

Ok Taecyeon, one of the members of idol group 2PM, recently made his acting debut in the KBS2 TV series "Cinderella's Sister" alongside actress Moon Geun-young.

"Cinderella's Sister" ends its run on the small screen tonight.

"Ok Taecyeon says "never dated anyone" since debut"
by HanCinema is licensed under a Creative Commons Attribution-Share Alike 3.0 Unported License.
Based on a work from this source