On "The King 2 Hearts", Lee Seung-gi and Ha Ji-won both in uniform 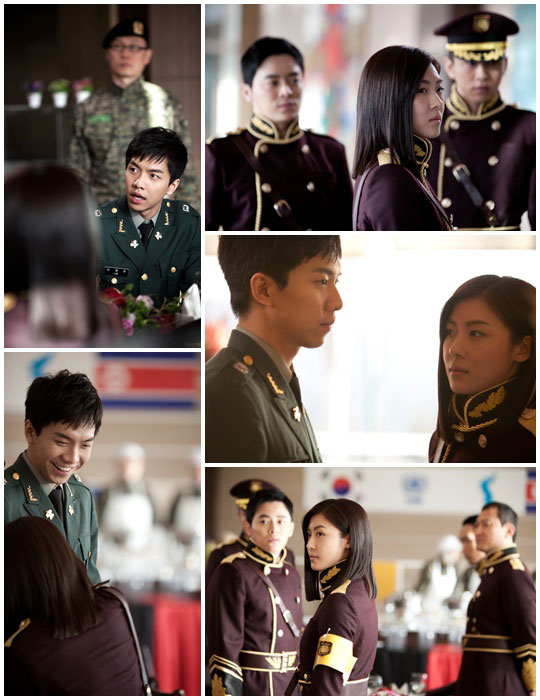 The set of "The King 2 Hearts", with actress Ha Ji-won and actor Lee Seung-gi, was revealed.

Following the conclusion of MBC drama "The Sun and the Moon", "The King 2 Hearts" has Ha Ji-won starring as Kim Hang-ah, a North Korean sergeant who trains the Special Forces, and Lee Seung-gi as reckless South Korean prince Lee Jae-ha.

The two meet for the first time just before the first episode started filming, which is when the recently released pictures were taken. Ha Ji-won appeared in a North Korean officer's uniform and Lee Seung-ki in a South Korean one.

Looking somewhat stiff and formal, the change from their natural images has any looking forward to seeing them in the future. Despite the fact that they met each other for the first time, they worked together really well.

Ha Ji-won was possessed by the Kim Hang-ah role, using a North Korean dialect with perfection. However, she laughed as soon as she went over to Lee Seung-gi and called his name in this tone.

Kim Jong-hak Productions said, "The actor and the actress did a very good job despite the fact that it was their first time working together. We hope you look forward to their performance in the future".

"The King 2 Hearts" is highly anticipated as it is another collaboration from producer Lee Jae-gyoo and writer Hong Jin-ah from the MBC drama "Beethoven Virus".

This is a black comedy with a tinge of human melodrama, and is about the love between North Korean Special Forces sergeant Kim Hang-ah (Ha Ji-won) and the reckless South Korean prince Lee Jae-ha (Lee Seung-gi) under the premise of a constitutional monarchy.

"On "The King 2 Hearts", Lee Seung-gi and Ha Ji-won both in uniform"
by HanCinema is licensed under a Creative Commons Attribution-Share Alike 3.0 Unported License.
Based on a work from this source