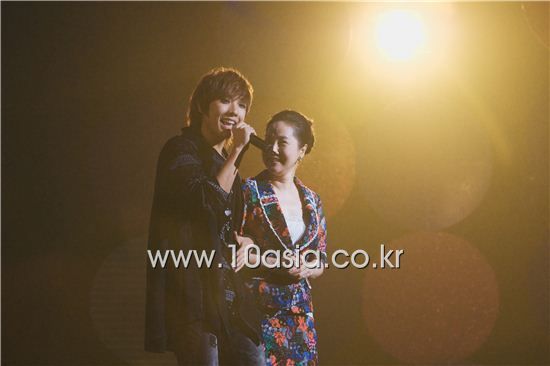 "Okay, fans please get ready". On a hot August day, boy band MBLAQ member Lee Joon, no, him as the rapper of popular idol group, is waiting on the stage of the Melon AX Hall in Seoul. This location, where a fan meeting and birthday party are shot together, is the set for MBC's one-act drama "Housewife Kim Gwang-ja's 3rd Meeting". Housewife Kim Gwang-ja (played by actress Yang Mi-kyung), who was spending boring and tedious days because of her curt husband and supporting her indifferent high school daughter, for the first time in her life starts acting as a 'fan' after coming across Jin's music. This starts to slowly change the life of Kim Gwang-ja's life and the people around her in the most unexpected ways.

It was not an open recording but when the stylist fixed Lee Joon's make-up and even when he just took a gulp of water, the screams that burst out from fans heated up the scene even more. Lee Joon, embarrassed from the cheering and applauding whenever the director gives an okay sign, shows the most natural stage manner when singing his group's song "One Better Day" wish revised lyrics. When glow-in-the-dark sticks are handed out, the supporting cast who have no experience being 'fans', they start shaking them thoughtlessly but it's a piece of cake for actual fans who have volunteered to take part in the shoot. For the climax scene where Kim Gwang-ja and Jin meet on stage, Lee Joon takes actress Yang Mi-kyung's hand and places it above his heart during a rehearsal. The audience automatically breaks out into a scream but the crew is busy steadying them while telling them, "Scream all you want, even more than you did now, when we go into shoot!" What is this strange meeting between an idol star and middle-aged lady -- romance? Just a scandal? Or something else? You can check the results of "Housewife Kim Gwang-ja's 3rd Meeting" at 10:35 a.m. on September 22.