On the set of SBS TV series "Steel Heart" 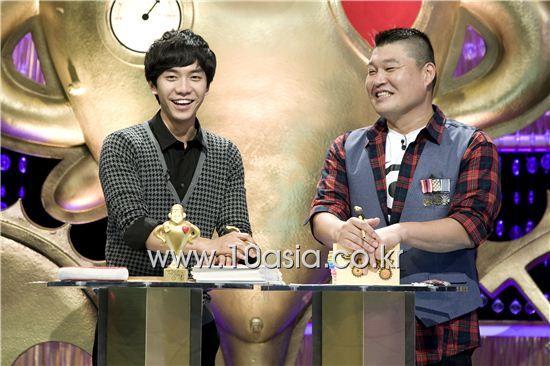 "There's no photo for Jia!" "Not Lee Ji-ah, not solo singer Zia so try typing in 'miss A Jia'". The dressing room of the 'Teuk Academy' team, composed of Super Junior members Leeteuk, Shindong and Eun-hyuk, of SBS talk show "Steel Heart" is busy two hours ahead of going into shoot. "There's a photograph she took with Nichkhun a long time ago. You'll probably be able to find it on Daum", Leeteuk says, chipping in to the dialogue between Shindong and Eunhyuk. His brain contains any celebrity's picture from the past and every photo of them netizens have edited. Then one after another, he also finds one of a foreign female singer with pink hair like Jia's and when Norazo's Jo Bin was pretty. And while simultaneously discussing with the show's writers of the sequence of events that will take place, dressing up for the show, and eating, Shindong talks about SM's recent trip to the United States for a concert. "I was sleeping in the plane when several members of our group and Girls' Generation started playing the mafia game! I was about to tell them they were noisy when I realized we had landed!" And his story on how he has started filming of SBS TV series "Doctor Champ" as a national Judo fighter was heartbreaking. "I ran for an hour because the script said 'run'. Lines? ... I had none".

K-1 fighter Choi Hong-man, making an appearance on a variety show for the first time in a while, appears at show host Kang Ho-dong's dressing room and tells him, "You've lost a lot of weight". But the former Korean wrestling champion is rather worried that the 'young and big' younger Choi might hit his head on the door and get hurt. "Watch out! Your head!" he remarks. Then as the show's co-host Lee Seung-gi hurriedly arrives on set after wrapping up filming for his drama, the cameras get ready to pre-record the one-year anniversary show of "Steel Heart". And while Kang may have a big voice, he humbles himself ahead of going into shoot, one which is a long race for both the speakers and the audience, and says, "A round of applause please, not for me but for Lee Seung-gi". The two hosts then put their soul and might into drawing out endless stories and reactions from the close to 20 guests on the show. The shoot, which started in the afternoon, went on till late night. The stories which went on air of course were only part of everything that was said that day. Many laughs and many tears may have been replaced with briefly funny and emotional moments. But their efforts to pull out as most or as best as they can was real. No matter how weak the story, Kang and Lee did not give up on them but rather found ways to link them to other stories. This is how "Steel Heart" has lasted for year.

"On the set of SBS TV series "Steel Heart""
by HanCinema is licensed under a Creative Commons Attribution-Share Alike 3.0 Unported License.
Based on a work from this source