On the set of the film "Cyrano Agency" 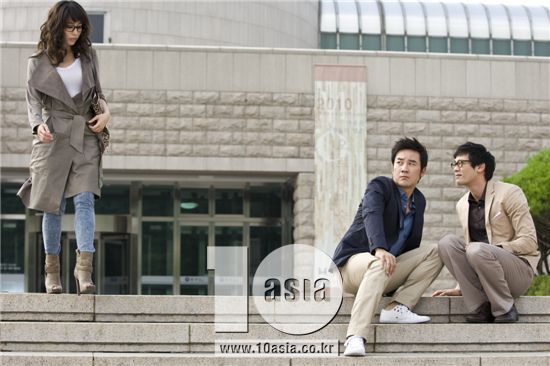 "Choi Daniel appears in the film, as do Lee Min-jung, Park Shin-hye and myself", answered actor Uhm Tae-woong on the set of the film "Cyrano Agency" in response to the question what viewers should watch for in the upcoming pic. That is right. The film "Cyrano Agency" draws one's curiosity just for the fact that actors Uhm Tae-woong of MBC drama "Queen Seon-deok", Choi Daniel of sitcom "High Kick Through The Roof", Lee Min-jung of SBS series "Smile, Love" and Park Shin-hye of drama "You're Beautiful" will be appearing in the movie after starring in each of their hit TV dramas. Also in the sense that it is the newest movie by director Kim Hyun-seok, who succeeded in combining romance and comedy in the film "When Romance Meets Destiny"

It is June 28, the open-set day for the film which has fallen on the Monday that Korea's National Museum of Contemporary Art is closed. In the scene being shot that day, theater director Byung-hoon (played by Eom Tae-woon), who has turned into a 'romance assistant' for financial reasons, is helping a man named Sang-yong (played by Choi Daniel), who has zero ability in dating women. Byung-hoon helps Sang-woon stake out around Hee-joong (played by Lee Min-jung), the women that he likes. As the film's crew members, who are gradually ripening under the blazing sunlight and the heated wind, arm themselves with towels and bandanas, it is hard to discern whether this shoot is taking place in the city of Gwacheon or in Dubai. But actress Lee Min-jung, who is even wearing a pair of boots and a trenchcoat in accordance to the season in the scene, walks up and down the stairs without shedding a single drop of sweat.

However, actors Uhm Tae-woong and Choi Daniel, who says they have become 'best friends' during the shoot that they go out for drinks and movies together, are engrossed in a friendly conversation with no regard to the beautiful actress. The sight kicks up the curiosity a notch as to where this incomprehensible three-way romance will be heading. 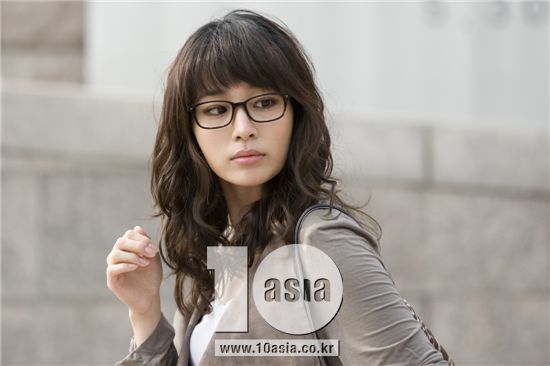 Actress Lee Min-jung takes part in a shoot for film "Cyrano Agency" at the National Museum of Contemporary Art in Seoul, South Korea on June 28, 2010. 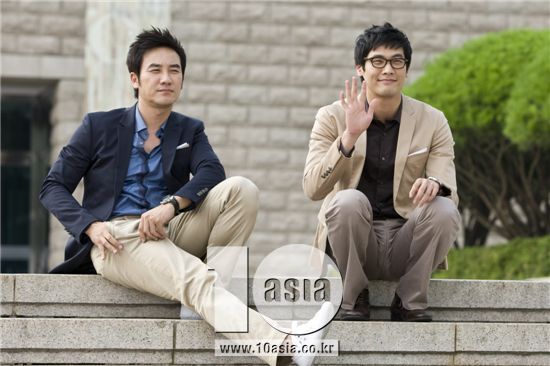 From left, actors Uhm Tae-woong and Choi Daniel take a break from filming "Cyrano Agency" at the National Museum of Contemporary Art in Seoul, South Korea on June 28, 2010. Actor Choi Daniel squints his eyes in the sun while taking a break on the set of film "Cyrano Agency" at the National Museum of Contemporary Art in Seoul, South Korea on June 28, 2010.

"On the set of the film "Cyrano Agency" "
by HanCinema is licensed under a Creative Commons Attribution-Share Alike 3.0 Unported License.
Based on a work from this source