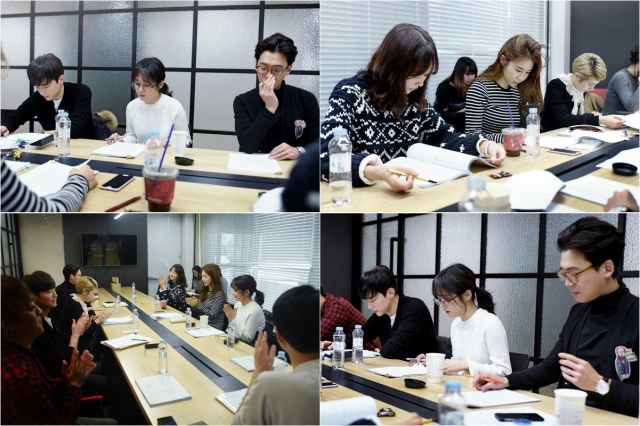 Actresses and actors Jang Nara, Kwon Yool, Yoo Da-in, Yoo In-na and Seo In-young are getting together in the new MBC drama "One More Happy Ending".

Jang Nara, Jeong-kyeong-ho and the other casts as well as Kwon Seong-chang, Heo Seong-hee and others had a meeting. After a few words of greetings, each of the characters showed their determination for their roles.

Jang Nara takes on the role of the director of a re-marriage company and single mom Han Mi-mo while Jung Kyung-ho plays a social news reporter and single dad Song Soo-hyeok.

Kwon Yool is a doctor and Soo-hyeok's best friend named Koo Hae-joon. Yoo Da-in is the co-director of the re-marriage company who got married early and became the madam of a rich family but is about to get divorced. Yoo In-na takes on the role of Ko Dong-mi, an elementary school teacher who just can't stop being single.

In the role of Hong Ae-ran is Seo In-young, an ex-member of the girl group Angels and currently an internet shopping mall director. She's fashionable and bubbly.

Producer Kwon Seong-chang said, "I hope this drama is a 'happy' one just like the title. We start in winter but we can heat up the atmosphere with our passion".

Meanwhile, "One More Happy Ending" is the after story of an idol girl group who are now over 30 years old and men who start over again after being tangled up with them. The single, the re-singles and born singles attempt to become happy once again. The first episode can be seen on the 20th of January.

""One More Happy Ending", a happy reading session"
by HanCinema is licensed under a Creative Commons Attribution-Share Alike 3.0 Unported License.
Based on a work from this source