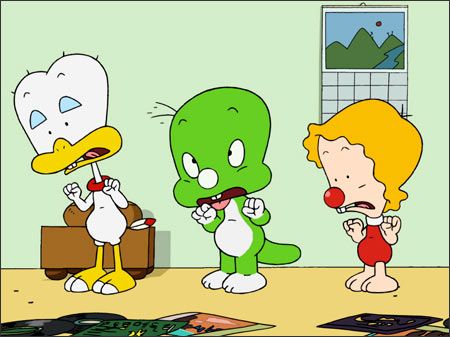 Cable network OnMedia is joining hands with professionals to create the next Dooly, the main character from the popular animation "Dooly, the Baby Dinosaur".

Korea has been struggling to revive the local animation industry. Ever since the popular character Dooly, which first aired in 1987 on KBS, artists, institutes and networks have strived to bring more interesting and creative characters to the table, but failed to attract anime-lovers compared to the flourishing Japanese market.

According to a paper released by the National Assembly Research Service early this month, Korea's animation industry stands at a crossroads.

Producers and firms may understand that the influence of animation is greater than other products because young children are the major audience and their exposure at early ages affect their future content choices. But because it takes time to create and finally air such series and manufacture related products, it is hard for producers to attract investment despite promising works.

So in order to establish a more consistent and effective approach, OnMedia, the media group that houses cable channels such as OnStyle, CatchOn and OCN, will collaborate with the Seoul Business Agency (SBA) and launch the "Ani Challenge 2010" project to nurture well-made television animations and characters.

"OnMedia has been putting a lot of effort into discovering and producing homegrown television animations such as `Cocomong' and `Dooly, the Baby Dinosaur' over the years. Through the collaboration with the SBA, we now have a more stable and systemized production condition, and I hope this will take us to the next level in creating successful animations", said Kim Sung-su, the head of OnMedia.

OnMedia and SBA will start receiving applications from aspiring animation directors and producers through July. The winning works will be put into production from August by OnMedia and finally be broadcasted in 2012 through OnMedia's cartoon network Tooniverse.

The SBA will not only support judging and investing, but also provide other technical support such as editing and recording. Each firm will support the project with 400 million won. The Seoul Animation Center, which is under the SBA, will also pitch in and further promote animations by making character toys and other products.

Tooniverse, one of the leading animation channels in Korea, has been airing and producing local animation programs for the past five years. In 2006, the network won the Grand Prize at the Korea Cable Television & Telecommunications Association for its animation program "Alien Sam". The network was also credited for re-airing the popular animated series "Dooly, the Baby Dinosaur" in 2009, which became the most popular series among children.
_______________
A scene from the popular animation series "Dooly, the Baby Dinosaur". / Korea Times File

"OnMedia to Nurture Animation Business"
by HanCinema is licensed under a Creative Commons Attribution-Share Alike 3.0 Unported License.
Based on a work from this source