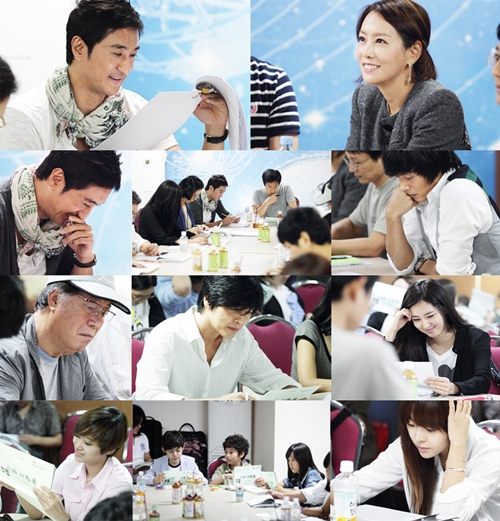 The crew and cast of "Ooh La La Couple" script reading on the 27th in KBS. In the still cuts revealed are Soo-nam (Shin Hyun-joon), Yeo-ok (Kim Jung-eun) and others such as Han Jae-suk, Han Chae-ah, Byun Hee-bong, Choi Sung-guk, Narsha and others.

The script reading started with producer Lee Jung-sub-I greeting everyone and laugher never ended in the room until the end. Shin Hyun-joonn greeted and shook hands with Kim Jung-eun, Han Jae-suk, Choi Sung-guk, Narsha, Junie and other kids actors and actresses.

Shin Hyun-joon's ajumma act and Kim Jung-eun's distasteful act made everyone laugh although it was just a reading practice. During break, Shin Hyun-joon didn't leave his seat and discussed about the character with the producer and writer Choi Soon-sik.

The "Ooh La La Couple" productions claimed, "Team work is important in comedy dramas. The first gathering turned out great so the next three months is looked forward to. The cast are eagerly giving out ideas and working hard. It should be a fun drama and not disappointing".

"Ooh La La Couple" will start making on the first week of September.

""Ooh La La Couple" script reading "
by HanCinema is licensed under a Creative Commons Attribution-Share Alike 3.0 Unported License.
Based on a work from this source