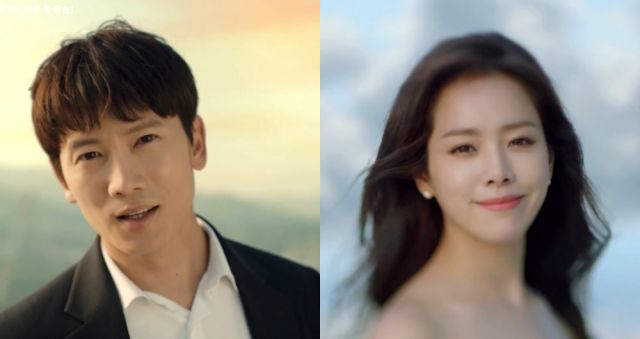 Get your theorizing caps on, because the newly released teasers for "Familiar Wife" bring us a meeting of two people in two universes, and an intriguing detail opening a whole new can of possibility worms. It all starts with a fateful choice that brings about what Ji Sung's hero describes as "My life's only 'if'".

The teasers are already playing up the concept of two worlds. Cha Joo-hyeok (Ji Sung) is spacing out, until a phone call snaps him out of it and sends him on a sprint to meet his belle. Han Ji-min's Seo  Woo-jin is still clearly dear to him, despite his choice that changes their very existence. Here is where the fantasy and romance elements become complicated, however. When the two protagonists seemingly meet, they are in the same scenery, but under different skies.

What interests me the most is the fact that we see two versions of Woo-jin. One is wearing a casual day dress, and seems to be in the same world as Joo-hyeok, judging by the setting sun landscape. The other one is glamed-up under a dreary grey sky, and she is the only one who seems to spot whoever she is thinking about. The question is, who is the one our hero sees? If he finds himself in another timeline where her fate has changed, will she even be the same person anymore?

This gets my curiosity going over what his choice, and their change of fate entails. Two worlds and two versions of them? Two versions of her and a husband missing from the original timeline? I know that hoping for meaty alternative reality elements in a drama like this is unwise, but I yearn for a series that is more than a "romance with a twist". "Familiar Wife" will be premiering on August 1st, on tvN.