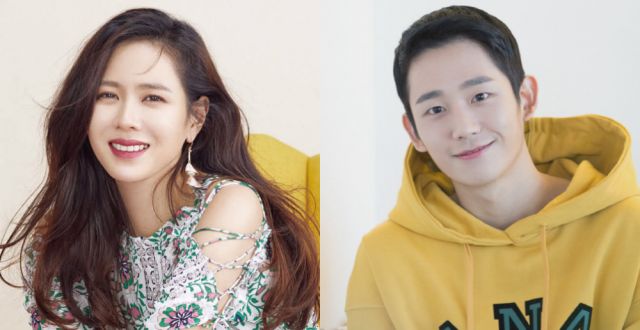 In a smooth case of "offered" leading to "accepted", Jung Hae-in has become the young man to receive the titular food from the titular noona of "Pretty Sister Who Buys Me Food". The drama is about a woman in her 30s who lacks direction in life and her romance with her best friend's younger brother.

Jung Hae-in will be playing said younger brother, Seo Joon-hee. The man works as a character designer in a computer game company, and he has returned to Korea after three years abroad. Even though he doesn't love the idea of coming back after experiencing all that freedom, things change when he meets Yoon Jin-ah (Son Ye-jin) again. He doesn't want it to be obvious, but he is attracted to her.

Jung Hae-in is what I call an "instant puppy", meaning an attractive young actor who is being skyrocketed to fame after popular roles. I like what I've seen of him in "Prison Playbook" and he has been building quite the résumé during his fresh career. When asked why he chose "Pretty Sister Who Buys Me Food", Jung Hae-in stated that this is a realistic and relatable love story, and that he was interested in his character. He said that Seo Joon-hee is free-spirited, but very earnest when it comes to love.

As much as the word "relatable" is used lately, I do have to say that this sounds like a typical noona romance on paper, so I'm curious how this ideal situation will be tailored to fit the word. At the very least, we have two adult actors in adult characters, and this something to really be happy about in today's Dramaland.

Carry on and love, noona and dongsaeng. "Pretty Sister Who Buys Me Food" is the fourth collaboration between director Ahn Pan-seok and jTBC. The series is written by Kim Eun and it will follow "Misty" in March.

"[Orion's Daily Ramblings] Jung Hae-in On Board for "Pretty Sister Who Buys Me Food""
by HanCinema is licensed under a Creative Commons Attribution-Share Alike 3.0 Unported License.