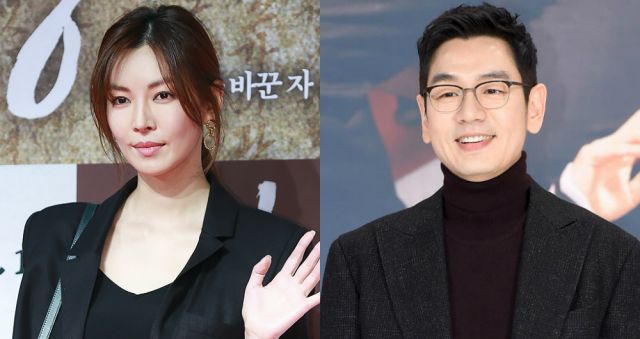 We have the final two casting confirmations for "Secret Mother", with Kim So-yeon and Kim Tae-woo having accepted their previously offered roles. Everyone looks suspicious, and plenty seem to have secrets, so join me in taking a swing at the hidden truths of this womance mystery thriller about a college admissions caretaker entering the home of a woman who holds the secret to her child's death.

Kim So-yeon plays Lisa Kim, the college admissions caretaker. She is known as a sincere person with a calm and refined demeanor, and she is hailed as an icon of maternal devotion and conviction for the students whose admission to foreign colleges she is in charge of. She is basically the kind everyone would swear by, and the kind they wholeheartedly trust.

Being the relentlessly suspicious person that I am, and given that this is a mystery series, the description of hardworking Lisa here seems all manner of shady to me. The image she projects is so very perfect, and all the talk of "maternal devotion" is a bit on the creepy side, considering she handles strangers for hire. Since this is a womance, I'm not assuming the worst for now, however.

On the other hand, hello, husband dearest! The information we have on Kim Tae-woo's character, Han Jae-yeol, is largely the same as previously released. He is an elite of the police force, and the youngest to climb through the ranks after graduating. He is liked by everyone due to his captivating demeanor and apparent kindness, and he has good interpersonal relationships, but he changes completely when facing criminals.

The newly added emphasis on his good relationships makes me wonder if they include his wife, Kim  Yoo-jin. Will we get a good husband, or is this a big ol' X mark on his marital fidelity? The elephant in the room, of course, is his complete change when handling suspects. Potentially sadistic tendencies aside, this means that he probably has plenty of enemies, so his involvement in the daughter's death seems very likely.

I am largely pleased with this main cast, and although writer Hwang Ye-jin is an unfamiliar part of this project, I hope she will bring the fresh approach so many new artists carry before the conformity of Dramaland takes its toll. I'm looking forward to the supporting cast of "Secret Mother", which will be airing in May on SBS.