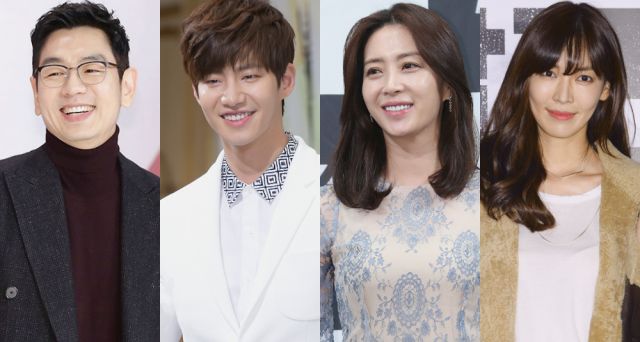 The ladies possibly joining upcoming mystery thriller "Secret Mother" may have possibly found their gents, as Kim Tae-woo and Song Jae-rim join the consideration game of positively reviewing roles for the drama. Additionally, we have some new character information about all the main characters.

Kim Tae-woo is up for the role of Han Jae-yeol, Kim  Yoon-jin's (Song Yoon-ah) husband. Jae-yeol is described as a man who has a captivating and intelligent demeanor. He is an elite police chief, and the youngest to climb through the ranks and reach that position after graduating from the academy. While people find him appealing, Jae-yeol makes a 180 degree turn when facing criminals. Of course he does, because Kim Tae-woo loves his jerks.

Song Jae-rim is considering the role of homicide detective Ha Jeong-wan. Jeong-wan is a man who is blunt and who moves forward on his own accord. He doesn't like thinking too much or being too serious. He is a "one step forward and two steps back" type of person, but his hotheadedness makes him go all the way to the end when he's determined.

We also have a bit more information on Song Yoon-ah's character. Kim  Yoon-jin was not only a successful doctor, but she became the head of the board of directors to her father's medical foundation, following the man's accident. After a speedy marriage to her husband, Yoon-jin quit her position to focus on being a full time mother. I wonder what this means about her relationship with her husband.

Kim So-yeon would play Kim Eun-young, whose foreign name is Lisa Kim, according to previously released information. Her role description is definitely an odd one, but not so much for a society as focused on academic success as South Korea.

Eun-young is essentially a caretaker for teenagers preparing for the college entrance exam. The role of this "college admissions nanny" is making sure that their assigned person has the nutrition, health and comfort needed for optimal exam preparation. She is described as someone who provides warm care through the home-stay she runs for those coming to study in the United States.

Despite the premise of one woman entering the home of the one who holds the secret to her child's death sounding like a clash ready to happen, the series is clearly described as a womance mystery thriller. It is about the friendship that forms between these women who both carry a lot of scars. A friendship based on the secrets that connect the two. Basically, sign me up and serve this to me on a platter.

"Secret Mother" will be directed by Park Yong-soon ("Wanted"). It will be written by Hwang Ye-jin and it is set to follow "The Good Witch" on SBS.