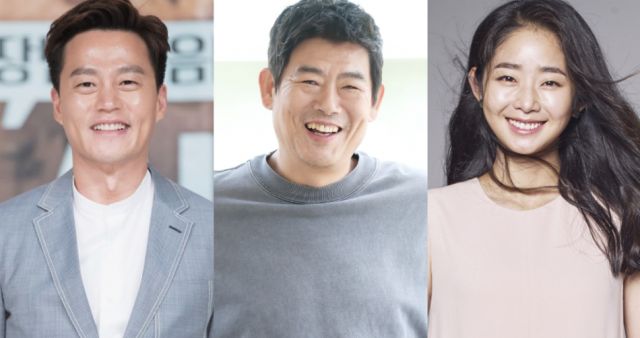 OCN has been gunning for film quality for a long time, and its new 'Dramatic Cinema' project will open with "Trap - Drama"; a hard-boiled thriller following the shocking story of national anchor Kang Woo-hyeon, who is caught in the titular trap. The series has cast Lee Seo-jin and Sung Dong-il as leads, with Im Hwa-young joining the lineup as well.

'Dramatic Cinema' is a 2019 project the goal of which is to combine the film and drama formats in order to create well-made genre pieces delivering the high quality of film production, and the packed storytelling of dramas. "Trap - Drama" will reportedly mark the birth of a new genre.

Lee Seo-jin plays Kang Woo-hyeon, the aforementioned anchor who has won the public's trust throughout the years as a reliable journalist. Although he has the respect of the people, a loving family, and is even invited into politics, he loses it all in the blink of an eye when he is caught in an unexpected tragedy while traveling with his family.

Sung Dong-il plays Go Dong-gook, a veteran detective who has a knack for field work. Dong-gook commits himself to the mysterious case of Kang Woo-hyeon, and begins to uncover the shocking truth that no one could have expected.

Im Hwa-young joins the leads as Yoon Seo-yeong, a dignified and free-spirited profiler with the Seoul Metropolitan Police Agency. A mascot of her profiling team, Seo-yeong becomes involved with the case alongside Dong-gook, and brings her excellent profiling skills, as well as her dignified and honest charm into the investigation.

Directing the drama will be Park Shin-woo-I ("Five Is Too Many", "White Night"), while writing it will be Nam Sang-wook ("Share the Vision", "Special Affairs Team TEN"). Director Lee Jae-gyoo of films such as "Intimate Strangers" and "The Fatal Encounter", and dramas such as "Beethoven Virus" and "Damo" will be producing the series.

I'm not extensively familiar with the creators, but the 'Dramatic Cinema' project sounds like the natural next step for OCN, which has primarily been a movie channel throughout the years. Their shooting for quality is hit and miss, as with any growing pains, but this is definitely an interesting direction to follow, and I'll be keeping an eye on it.