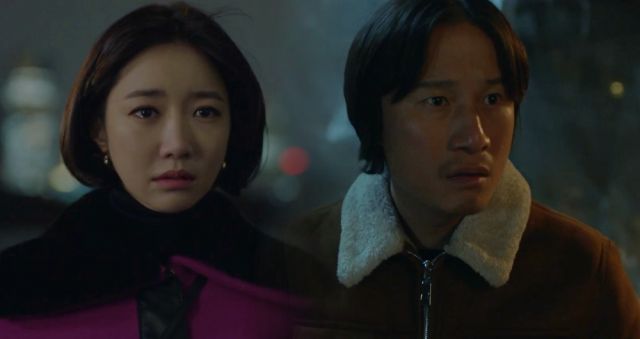 OCN's "Possessed" brings us crime-style meet-cutes and impossible killers this March, and we get to be teased by two whole minutes of it. The drama follows a psychic and a detective who have to tackle cases committed by the supernatural.

The video starts with the not-so-smooth meeting between our leads. Kang Pil-seong (Song Sae-byeok) gets mopped by Hong Seo-jeong (Go Joon-hee) while trying to apprehend a suspect. Seo-jeong mistakes the detective for a criminal, a misunderstanding she attributes to Pil-seong's thug-like face.

The two reunite, as Pil-seong suffers from hauntings in his house, and asks for Seo-jeong's help. We also get a little romantic teasing, as a drunk Seo-jeong asks him to go to her place for ramyeon, which is the Korean equivalent of "Netflix and chill". Pil-seong is left ranting about his imaginary scenario of reacting to this request with gentlemanly coolness, while even his ghost friends find him pitiful.

The mood changes when serial killings come into play, which is a connection Pil-seong makes due to the murder pattern. Seo-jeong feels the energy of a murderous spirit at the crime scene, having been shown this by her gift. Pil-seong eventually tracks the evidence to a serial killer named Hwang Dae-doo (Won Hyeon-joon). The catch is that this man, who killed 30 women in 5 years, was caught and executed 20 years ago.

The monster in question is clearly still active, and Pil-seong knows how quickly they need to act in order to stop him. The preview closes on an eerie note, as we hear the words of detective Kim Nak-cheon (Jang Hyuk-jin), who caught the serial killer in the past. "I don't know why I keep seeing him when I look at you", he says, as we see Hwang Dae-doo's spirit meeting Pil-seong.

Wow. I'm invested. It's clear that the comedic element of "Possessed" won't last long, and that is to be expected, but I still like the dynamics here. Seo-jeong may be a civilian, but she has rank on her side when it comes to the supernatural. I'm also curious to see how these impossible crimes will find solutions in the world of the living. I'm ready for "Possessed", which will be premiering on March 6th.