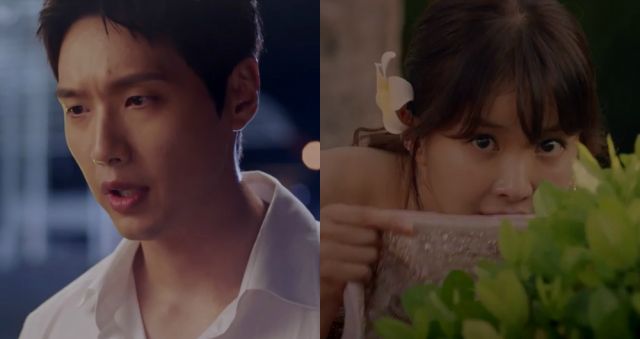 I trust the science of "Risky Romance" about as much as I'd trust a butcher with brain surgery, but the series is very dedicated to its idea of raging hormones, which our heroine thinks are becoming a life-threatening danger to our hero. Her experiment includes invasion of privacy in all forms, and misunderstandings aren't far behind.

The teaser reveals more about leading man Han Seung-joo's (Ji Hyun-woo) condition, which seems to have started with a surgery following a car accident. A colleague makes her suspicions clear, saying that something must have gone wrong, because he is not the man they knew. Seung-joo is impulsive, aggressive, and he has clear anger management issues.

Enter leading woman Joo In-ah (Lee Si-young) with her obsessive certainty that the only explanation for his ailment is hormones. The doctor clashes with Seung-joo while she studies him, even to the point where he can't have some sex in peace. What gets me curious here is her cautionary remark of "If you make a mistake, you could die!" Is he experimenting on himself, or has the surgery left him with some ticking bomb of a condition?

The drama does look like a blast from the past in its setup and style, so it might just be a relaxing, fun romantic comedy, medical field be damned. I'll probably need to leave my brain at the door for it, but with Dramaland science, that will be a piece of cake to accomplish. "Risky Romance" will premiere on July 23rd on MBC.