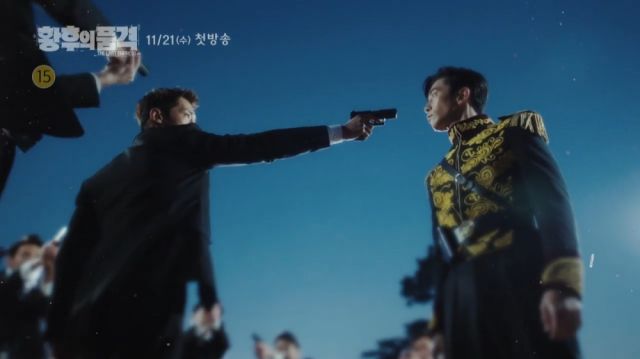 Yes, you've watched makjang and yes, you've watched sageuk, but have you watched a modern empire with all the drama plus cheesy villains, burning cars and firearms? "The Last Empress" is here to cover all your needs for royal mayhem and thrills with a teaser almost as unhinged as its characters.

The story begins oh so prettily, with emperor Lee Hyeok (Shin Sung-rok) and empress Oh Sunny (Jang Nara) having an emotional proposal and exchanging compliments during their wedding. This is not a fairy tale, however, so something has to go more badly than usual, and trample on our hearts. Enter Min Yoo-ra (Lee Elijah), an affair, murder, an angsty guard, palace conspiracies, and a lot of grief.

Given previous descriptions and this new teaser, it looks like the emperor's affair is a sort of open secret, which Sunny herself seems to at least suspect. Our heroine will sadly not be leaving the palace all that easily. There is drama involving the empress dowager (Shin Eun-kyung) and her firm warning of paying for one's sins, and let's not forget imperial guard Na Wang-sik (Choi Jin-hyuk), who vows to kill Yoo-ra and Hyeok while pointing a gun at the latter.

I'm left with a "What did I just watch" feeling, and I'm still processing whether it's a good feeling or a bad one. I'm all for exciting thrillers, but this looks almost campy at the moment. Here's hoping that the premise is simply too packed to summarize in a video, and that this won't be as one-dimensional as it looks. "The Last Empress" will premiere on the 21st on SBS.

"[Orion's Daily Ramblings] "The Last Empress" Goes All Out on Drama for Third Teaser"
by HanCinema is licensed under a Creative Commons Attribution-Share Alike 3.0 Unported License.