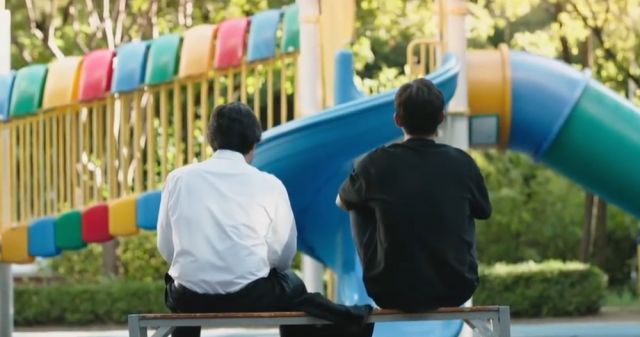 The bromantic ship of forlorn lovers is sailing in upcoming two-part drama "Ping Pong Ball", and the first teaser featuring the world-weary duo portrayed by Yoo Jae-myung and Ji Soo has been released. The video is simple, understated and human, as the two share their imminent romantic rejections.

Yoo Jae-myung is Kim Deuk-hwan, a homeless person with seemingly no contacts, while Ji Soo portrays Kim  Yeong-joon, a philosophy major. In this scene, the older man asks "Is it completely over with that girlfriend of yours?". The young man confirms it, saying "I think it's over". He's not alone in being dumped, however. Deuk-hwan responds "It's probably over for me too".

This is where the little twist, or rather denial of encouragement comes in. Yeong-joon quickly reacts with "It's not over for you yet", adding "It just feels that way. You said you've always been good with other people's problems" when Deuk-hwan asks him how he knows. Aww, you two. You hopefully real and alive two. "Ping Pong Ball" will premiere on September 17th on jTBC, and I hope to see it subtitled.