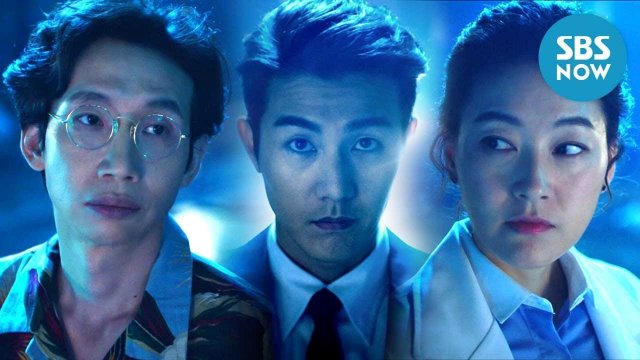 SBS's upcoming 'industrial accident mystery investigation' drama "Doctor Detective" reveals its three leads in its premiere teasers, and it paints the very real world where their struggles will take place. Park Jin-hee, Bong Tae-gyu and Lee Ki-woo are about to throw down, and lives are at stake.

"Doctor Detective" is a social drama about those who reveal the hidden truths behind industrial accidents and occupational hazards. The teasers open with news footage about infamous cases, such as the Guui Station Accident, where a maintenance worker lost his life. The talk eventually reaches the subject of taking responsibility, before the anchor gets very personal, directly asking us through his lens "Is your workplace safe?". The text is loud and devastating. 'The yearly average number of victims to industrial accidents in Korea, 92,769'.

That is when our three leading characters find themselves at odds as two fighters for justice and one third generation chaebol. In the second teaser, the news plays against the backdrop of a deceptively calm reality, before a memorial sign is shown with the heartbreaking message of "This crazy society has killed another youth. Right at this spot", following an image of people leaving flowers in the victim's memory.

While I like this second teaser, I have mixed feelings about the first one. Although the element of realism brought in by the news footage, as well as the anchor's almost fourth wall breaking question shake me up in the best of ways, the sleek and playful confrontation between the three leads makes for a jarring change in tone. I would have preferred a more straight-faced drop of the three leads' star power in an otherwise sombre video. "Doctor Detective" is definitely a drama I want to check out, and it will be with us starting July 17th.